Zoom ‘investigating’ as eastern US, southern UK hit by wave of outages

Zoom ‘investigating’ as eastern US, southern UK hit by wave of outages

Video-conferencing platform Zoom is scrambling to get to the bottom of thousands of outage reports, concentrated in eastern US cities and the Greater London area, as schools struggle to start the semester teaching from a distance.

Thousands of outage reports on DownDetector.com were clustered in cities along the east coast of the US on Monday, including New York, Boston, Atlanta, and Washington DC. Cities further inland, including Chicago, Minneapolis, and Houston, also appeared to be severely affected. Across the ocean in the UK, users in London were reporting numerous issues.

Zoom acknowledged it was receiving “reports of users being unable to start and join Zoom Meetings and Webinars,” tweeting an apology and reassuring customers it was “investigating.” Its status page showed “partial outages” for Zoom Meetings and Zoom Video Webinars, though all other categories were listed as “operational” on Monday morning.

The outage couldn’t have come at a worse time for many of the schools that were scheduled to begin their classes remotely on Monday using Zoom. Due to the Covid-19 pandemic, many educational institutions have opted to instruct students in their homes in an effort to slow the spread of the virus.

Frustrated users took to Twitter to vent, with some suspecting nefarious motives, given Monday is also the first day of the Republican National Convention. The four-day political event is being held remotely for the most part.

Isn’t it convenient that Zoom would go down the morning of our #RNCConvention?

Others took a more laid-back approach, likening it to a snow day and basking in the temporary reprieve from classes.

Zoom just went down worldwide. It is part of the new reality of virtual learning like a digital “snow day.” Of course, there is no ritual that fits. My kids would flush ice cubes down the toilet to cause snow days but flushing one’s laptop is quite expensive and difficult.

I hope Zoom stays down pic.twitter.com/yxirt8T8mW

The platform’s popularity soared under lockdown as employees were restricted to working from home, and this has inspired Big Tech competitors like Facebook and Google to roll out their own video-conferencing services. 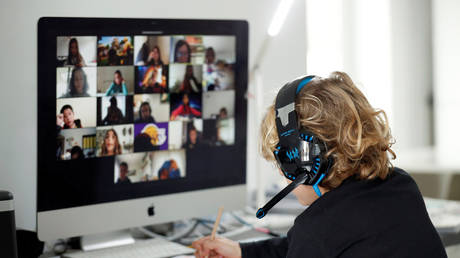