President Aleksandr Lukashenko has called upon Belarusian citizens to not “go into the streets” and o avoid protests, blaming foreign agents for stoking the unrest that has gripped the country after the controversial election.

“Don’t go out into the streets now! Understand that you and your children are being used as cannon fodder,” Lukashenko said Friday, during a meeting with the country’s National Security Council.

They’ve already come here in large numbers from Poland, the Netherlands, Ukraine, from this ‘Open Russia’ – [Russian opposition figure Alexey] Navalny and so on and so forth. The aggression against the country has already begun.

Addressing the handling of the protests by the police, Lukashenko has all but defended the sweeping police action. At least 6,700 people have been detained over the past few days, while the authorities have been accused of excessive force and even “torture” of incarcerated protesters. Lukashenko insisted that, as a “military man,” he has no other option than to deal with the unrest, however.

“Do you want me to sit and wait until the whole of Minsk is upside down? We’ll stabilize the situation later,” the president said, promising to “deal with” the foreigners who allegedly came to Belarus to take part in the unrest.

Lukashenko has offered some wisdom to police officers, who’ve notably been much more lenient to protesters since last night, saying they shouldn’t be beating prone and defenseless people. On Thursday, Interior Minister Yuri Karayev publicly apologized to people “accidentally” caught up in the crackdown and said he’d issued clear orders not to touch members of the press. This came after days of alleged beatings of both civilians and journalists, both in the streets and in detention facilities, with grisly details emerging in multiple media reports.

The Belarusian authorities have freed more than 2,000 of those detained on Friday, but thousands more are said to remain behind bars, so far without charge. 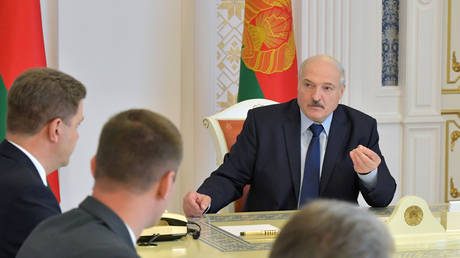