Young people in Germany will have an opportunity to apply for one year of free military training as part of Defense Minister Annegret Kramp-Karrenbauer’s project aimed at addressing a chronic personnel shortage in the army.

Kramp-Karrenbauer, commonly known in Germany as AKK, expects the first volunteers to join the program called “Your Year for Germany” in 2021.

Participants are expected to get six months of basic military training in their home region and then serve for another six months as reserve duty servicemembers somewhere not far from home.

The project is intended to boost the defense capabilities of the German military, which has suffered from an almost constant shortage of new recruits, as well as making it more effective as a NATO member.

The German Armed Forces, or Bundeswehr, has gradually reduced its manpower since the end of the Cold War, most significantly after compulsory military service was abolished back in 2011. Since then, the military has been struggling to fill its ranks.

The constant lack of personnel forced the Defense Ministry to devise various ways of attracting new servicemembers over the years. Previous such attempts involved a series of massive ad campaigns targeting teenagers, which led to a spike in the number of underage soldiers in the Bundeswehr.

On another occasion, the German defense chief suggested recruiting people from other EU nations for certain posts.

However, the problem persists – and has arguably become even more pressing due to Berlin’s more active military presence abroad, and pressure from Washington, which has demanded that Germany live up to its NATO obligations.

The German Army’s seemingly never-ending battle against the personnel shortage has prompted the parliamentary commissioner for the army, Eva Hoegl, to call for the compulsory military service to be brought back.

“I believe it was a huge mistake that conscription was abolished,” she told the German media. The commissioner also implied that compulsory military service would somehow make it difficult for right-wing extremist ideas to spread among troops.

Germany’s dark past has been plaguing the Bundeswehr for quite some time, as the military repeatedly found themselves at the center of scandals involving far-right extremists or Nazi sympathizers.

The commissioner’s remarks did not sit well with opposition figures. They said conscription is “completely unnecessary” and would hardly help to battle the far-right extremists within the army ranks.

AKK herself has so far opposed the idea of reintroducing compulsory military service. “It is not about bringing back the old form of conscription,” she said while introducing her new project. Neither is it about specifically fighting the far-right, according to her.

However, back in November, the minister, who is also the head of Chancellor Angela Merkel’s Christian Democratic Union, pushed for compulsory “community service” for youngsters under the very same “A Year for Germany” slogan at one of the party’s meetings, but the idea apparently had little success. 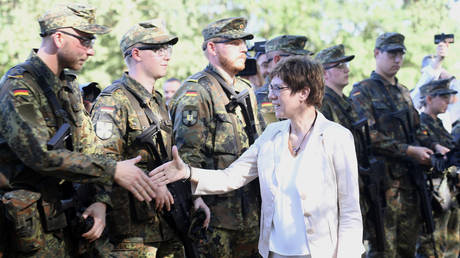