A popular teen musician in Sweden, known by the name of Einar, was shot and killed in the country’s capital on Thursday. The young man, who had been previously abducted, is said to have been connected to the world of crime.

The 19-year-old Einar, whose real name is Nils Kurt Erik Einar Gronberg, was murdered in Stockholm’s residential area, outside an apartment building late on Thursday. The musician, who had won several music awards, including Swedish Grammys, was shot in the head and chest, Expressen newspaper reported, citing police. Paramedics were unable to help the teen, who died on the spot, a spokesperson for Stockholm’s police, Towe Hagg, said.

The victim is believed to have been in the company of two other artists, “who have seen either parts of the whole incident,” Expressen reported citing another police spokesperson, Ola Osterling. Another two men had been seen running from the scene, the report added, saying that a murder investigation has been opened, but no arrests have been made so far.

Police are on alert over a possible escalation of gang violence, as retaliation crimes might rise after the high-profile murder, according to local media. The rapper was associated with people from criminal networks, reports suggested, adding that Einar recently lived under constant threats and had “a price on his head.” References to the world of crime, weapons and drugs are featured in his songs, with a hit that brought him to fame, ‘Katten i trakten’ (‘The Cat in the Area’) said to be dedicated to a murdered gang leader.

Last year, the musician was kidnapped by a criminal gang, who demanded 3,000,000 Swedish Krona (some $350,000) for his release. The artist, who topped the country’s charts, was also robbed, beaten and blackmailed, according to prosecutors. He later refused to cooperate with police and prosecutors on the case of his abduction. A rival artist, rapper Yasin, was jailed for his role in Einar’s abduction. Another rapper, Haval, was also imprisoned for a longer term for complicity in the kidnapping and robbery.

Einar himself was recently involved in criminal incidents. Last month, he reportedly attempted to snatch a service weapon from a police officer. Earlier this month, he was arrested as one of several suspects in a stabbing incident in central Stockholm, but was released by police in both cases.

Sweden’s top officials have commented on the rapper’s death. “It’s tragic that another life has been lost,” Prime Minister Stefan Lofven told reporters, adding that Einar “meant a lot to many young people.” Minister for Gender Equality and Housing Marta Stenevi wrote on Twitter that the “young man fell victim to the deadly violence,” and said it “must be stopped.”

Organized crime activity has been on the rise in Sweden in recent years. With shootings often occurring in Stockholm, Malmo and Goteborg, over 270 such incidents have been recorded so far this year, with 40 people killed, according to police statistics. This year, the Scandinavian country of ten million moved from one of the lowest rates of gun violence in Europe to the second highest.

The rapper’s murder “is deeply tragic, and at the same time frightening, as one almost expects something like this to happen,” a man who came to the crime scene to pay tributes to Einar told Swedish Mitti news. The man said he had been living in the neighborhood for 20 years, but violence and police presence sharply increased in recent years. “I do not let children be outside by themselves when it is dark,” he said. 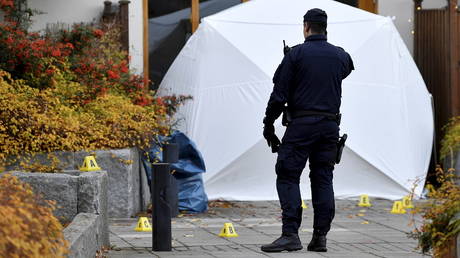 Government vows to root out ‘m...