You thought asteroids were bad? ESA warns COMETS may do far ‘MORE DAMAGE’ if they hit Earth

You thought asteroids were bad? ESA warns COMETS may do far ‘MORE DAMAGE’ if they hit Earth

Comets are not harbingers of doom, just harmless lumps of ice that produce majestic sky displays when passing the Sun, right? Not according to the European Space Agency, which has warned of their deadly capabilities.

A comet is “likely to cause more damage than an average asteroid of the same size,” the agency says – despite the fact that comets tend to weigh less than asteroids of similar size because the material they are made of is less dense.

Therefore, an average comet of a given diameter will likely cause more damage than an average asteroid of the same size#AsteroidDay#SpaceCare

This tidbit of alarming knowledge comes ahead of Asteroid Day later this month, as the ESA tries to raise public awareness of the dangers space may pose to Earth.

The difference between asteroids and comets is actually not as definitive as one might think, but broadly speaking we know which is which. The former objects are rocky or metallic, come from the region of the Asteroid Belt and may require some heroic oil drillers with a nuclear bomb to go to space and stop them, at least according to Hollywood.

Comets, on the other hand, are made of frozen volatiles that the Sun boils and turns into spectacular plumes of gases and dust as they pass by – something which spooked the hell of our ancestors. They are relatively rare, though, and are only found in large quantities on the outskirts of our solar system.

The ESA/NASA mission SOHO, which was launched in 1995, has recently celebrated its 4,000th comet discovery. For comparison, NASA tracks almost 23 thousand asteroids in Earth proximity, including over 900 that are larger than one kilometer in size.

Congratulations to the ESA/NASA Solar and Heliospheric Observatory #SOHO on its 4000th #comet discovery!
Launched in 1995 to study the Sun, SOHO has also become the greatest comet finder in history – with the help of many citizen scientists ☀️🛰️☄️
Details: https://t.co/lQG5HqyOKs pic.twitter.com/iMVqn2X1s8

But in terms of destructive power, size and mass are not the only things that matter. Comets approach Earth at greater speeds, so if one were to collide with our planet it would have more energy to release in an atmospheric explosion than a heavier, slower-moving asteroid would.

Comets are less dense than asteroids, therefore for a given diameter they are also less massive and carry less energy. However, most comets are in higher-eccentricty and inclination orbits, resulting in much higher relative velocities with respect to Earth

The most powerful impact event in recorded history, the 1908 Tunguska incident in Russia, may have been caused by a comet rather than an asteroid, judging by the lack of debris following the crash. The Chelyabinsk meteor which wreaked havoc – again, in Russia – in 2013 was a rocky one, but most of its mass was obliterated in the airburst, with only small chunks reaching the surface.

Luckily, only around 100 comets that we know of come close to Earth, so their destructive potential will hopefully remain hypothetical in our lifetime.

Currently, we know of ~ 100 near-Earth comets (going up by one or two entries per year). Fortunately, the chance of an impact from an ‘NEC’ is significantly lower than for near-Earth asteroids, of which we currently know there are 22 933!#SpaceCare
📸1998 OR2, @NAICobservatory pic.twitter.com/2CC4gBpWP3 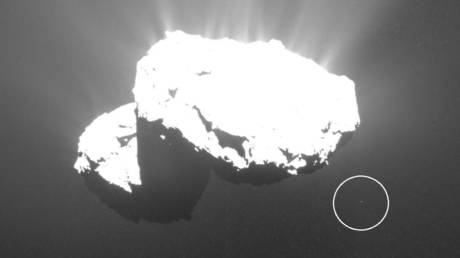 ‘Thanks for the hint’: Amazon halt...

Taiwan will hurt its own people by...