‘You cannot lock down everybody’: Madrid leaders oppose Spanish govt’s plan to lock down capital

‘You cannot lock down everybody’: Madrid leaders oppose Spanish govt’s plan to lock down capital

Conservative-led authorities in the Madrid region on Thursday criticized the Spanish government’s plan to confine the capital city in an effort to tackle a surge in Covid-19 cases.

Announcing its plan late on Wednesday, the Health Ministry said the central government was overriding regional authorities to impose a lockdown of the city of over 3 million people in the coming days. Nine surrounding municipalities with populations of at least 100,000 each will also be included in the plan.

“You cannot lock down everybody,” regional chief Isabel Diaz Ayuso said, speaking on esRadio. “I’m sure the Madrid plan is the best: quick tests and quarantines, and life goes on.”

Diaz Ayuso added she would challenge the socialist-led central government’s order in court. The northeastern regions of Catalonia, Andalusia, and Galicia have also opposed the new restrictions.

The ministry, which published the decision in an official journal, said regional and local authorities would have 48 hours to comply once a separate order was published. However, it was not clear when that would happen, and Diaz Ayuso also said on Thursday that the committee that took the decision had no legal authority to do so without a consensus.

If the new curbs come into force, the 10 municipalities will see their borders closed to outsiders for non-essential visits. Only those traveling for work, school, doctors’ visits, or shopping will be allowed to cross. The curfew for bars and restaurants is being moved from 1am to 11pm.

Spain has recorded 769,188 Covid-19 cases – the highest rate in Western Europe – and 31,791 deaths. Madrid has 735 cases per 100,000 people, which is one of the highest of any region in Europe and double the national rate in Spain. To reduce the spread of the pandemic, the authorities in the Spanish capital had already imposed a partial lockdown in 45 mainly poorer areas. 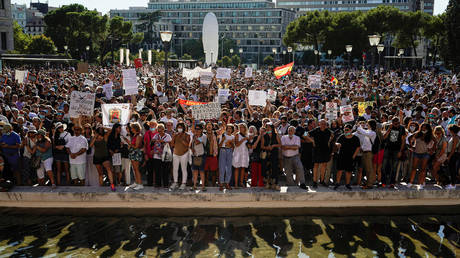