Close
Trending News
HomeWorldWorth a shot: Belgian man has fecal transplant to stop him getting drunk from alcohol brewed in his gut

Worth a shot: Belgian man has fecal transplant to stop him getting drunk from alcohol brewed in his gut

Worth a shot: Belgian man has fecal transplant to stop him getting drunk from alcohol brewed in his gut

A 47-year-old Belgian man kept randomly getting drunk over the course of two months, despite not having had a drop of alcohol to drink. The culprit? A home brew that was fermenting in his own gut.

After a prescribed low-carb diet and anti-fungal medications did nothing, dumbfounded doctors at University Hospital Ghent soon got to the bottom of the case: the man was, in fact, drunk from alcohol produced in his own gut, thanks to a condition known as auto-brewery syndrome (ABS).

In ABS, the gut microbes turn carbohydrates into ethanol, so the unnamed man was quite literally high on his own supply, complete with elevated blood alcohol levels and powerful dragon breath – which eventually cost him his driving license during a random breathalyzer test.

Doctors opted for a fecal transplant to try and end the man’s bemusing bender. Fecal transplants are a relatively recent addition to the medical canon of treatments, in which donor stool is directly inserted into the colon or administered via a nasal tube, which then goes down the patient’s throat and into their gastrointestinal tract.

In some cases, medical staff will freeze-dry a fecal sample into a pill and the patient swallows it.

Regardless of how the man received the fecal transplant, kindly donated by his 22-year-old daughter, it had immediate and lasting effect, with no symptoms reported in his 34-month follow-up appointment, thus bringing an end to his terrifying ex-beer-ience.

Auto-brewery syndrome is more common in those living with diabetes, obesity or conditions such as Crohn’s disease. The so-called ‘good bacteria’ in the gut are believed to be responsible for the condition, but we still don’t fully understand its root causes.

“Fecal transplants should be given a try in the future in patients with ABS [auto brewery syndrome]. Setting up a trial would be the ideal scenario, but given the rarity of the syndrome, this kind of trial in humans will not be possible,” said Dr Danny De Looze, co-author of the patient’s case study.

While the extremely rare condition is not likely tequil-ya, it can cause major problems in everyday life, including impaired liver function. 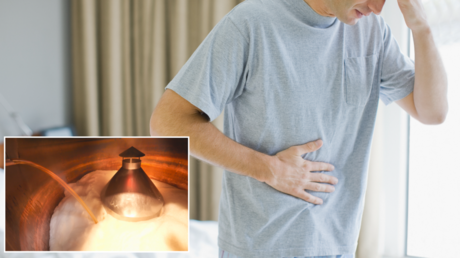