A poll taken in 53 countries has found that 44% of people around the world consider the United States to be a threat to their democracy – significantly less than those who believe the same about China and Russia.

Fear of Russian influence was the lowest of the three, with only 28% considering Russia to be a threat to their democracy, compared to 36% who expressed no concern.

Asian countries were high among those that feared US influence, with people in Pakistan fearing Washington the most. Japanese respondents also consider the US to be a greater concern than China – while Mexico, Canada, Colombia, Greece, Israel, Australia, Ukraine, and Switzerland were also among the top half.

While people in European countries expressed lower levels of fear when it comes to US influence, they still expressed more fear about US influence on democracy than influence from Moscow or Beijing.

Meanwhile, 64% of the world also considered economic inequality to be a threat to democracy, along with “limits on free speech” at 53%, “unfair or fraudulent elections” at 49%, and the power of Big Tech companies – most of which are based in the United States – at 48%.

Regarding the US’ “role in world affairs,” people in Russia, China, and Europe were most critical, while Latin America and Asia were more positive.

The report also showed that concerns over US influence on other democracies has increased since last year – up 20% in Germany alone and 16% in China.

The survey was conducted by Latana in partnership with the Alliance of Democracies, which was founded in Denmark by former NATO secretary general Anders Fogh Rasmussen – a detail some on social media found interesting, given that the results showed higher levels of fear regarding the US than Russia and China.

Hilarious: A US govt-funded org founded by NATO to spread “free markets” did a poll in 53 mostly rich countries

And this biased poll excludes most of the Global Southhttps://t.co/YwBz9I5MiF

The Alliance of Democracies boasts that it is funded by “several democratic governments,” including Canada. It has also received money from Google, Facebook, Microsoft, the George W. Bush Institute, the Atlantic Council and the George Soros-funded National Democratic Institute. 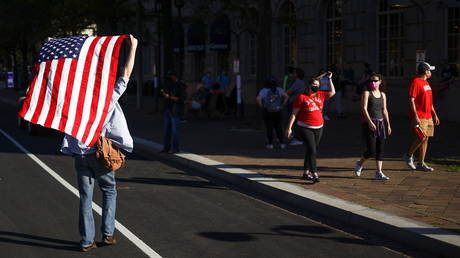