The World Health Organization (WHO) said it resorted to banning the words ‘Taiwan’ and ‘China’ on its social media pages after getting “spammed” with politically-charged comments.

The UN health agency was targeted by “an onslaught of cyberattacks by online activists on a number of controversial issues, using keywords such as ‘Taiwan’ and ‘China,’” the organization said in a statement.

It added that the WHO’s social media team switched on “content filters” because the influx of politically-charged comments was getting in the way of people who came to its social platforms to talk about health issues.

WHO defended the filters as “a practical measure that does not reflect a value judgment or any policy” of the organization. The aim was to help people to “avoid being spammed through cyberattacks, including from bots,” it said, adding that the ban on words ‘Taiwan’ and ‘China’ has since been lifted.

For years, Taiwan has been blocked from formally joining the WHO because China considers it a part of its territory. On Monday, the island nation was not allowed to participate in a meeting of the WHO’s main decision-making body.

According to Taiwanese media, local politician Chen Po-wei noticed on Thursday that the word ‘Taiwan’ was blocked in the comments section below the Facebook streaming video of the WHO event.

Taiwanese social media users also discovered that phrases like ‘China virus’, ‘Wuhan virus’ and ‘Taiwan can help’ – the slogan used by the government in a bid to join the WHO amid the Covid-19 pandemic – were also getting blocked.

They then went on to try different spelling methods to circumvent the contents filters and started leaving angry comments bashing the WHO.

The Taiwanese envoy to the US, Hsiao Bi-khim, denounced the ban on certain words as “censorship.”

Troubling that the WHO is taking on the CCP’s habit of censorship. pic.twitter.com/7NiZH3GdhO

“We’d like to express our displeasure and dissatisfaction at the WHO’s attempt to erase Taiwan!” the nation’s foreign ministry wrote on Facebook.

Ministry spokesperson Joanne Ou rejected the claim that cyberattacks were involved. “They are just people leaving messages to support Taiwan, including our allies,” she told Reuters. 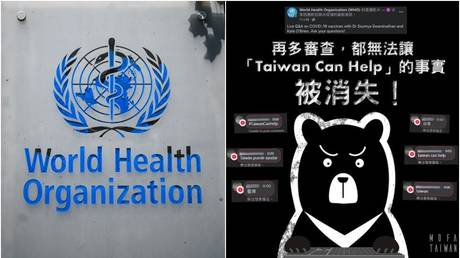