L’Oreal is removing the words “white,” “fair’ and “light” from beauty products it’s now describing as “skin-evening,” making it the latest corporation to succumb to virtue-signaling pressure amid the BLM protests.

The world’s largest cosmetics company announced the change on Friday, after being called out by social media users and activists who have criticized brands for sharing social media posts in support of Black Lives Matter, while still selling their own problematic products. Skin lightening products are an $8.3 billion-a-year business, but public pressure is forcing brands to choose political correctness over profits.

L’Oréal Paris stands in solidarity with the Black community, and against injustice of any kind. We are making a commitment to the @NAACP to support progress in the fight for justice. #BlackLivesMatter pic.twitter.com/4VDZUAdgXv

I’m honestly not surprised a brand like L’oréal did this to you, when across the world, in south asian countries, they promote skin lightening products and use big SA celebs to market those products. Like @Loreal, is this not you?? pic.twitter.com/Vo95TAySJd

The move comes after a number of Bollywood actresses, including Priyanka Chopra, were challenged on social media for posting their support for Black Lives Matter when they had previously endorsed skin-lightening creams, like Garnier Light Ultra, which is owned by L’Oreal.

L’Oreal’s decision follows an announcement by Unilever’s Indian subsidiary, Hindustan Unilever, that it would change the name of its “Fair and Lovely” range of skin products on Thursday. The brand has long come under fire for its advertising campaigns that imply success comes with lighter skin. In 2017, it defended itself by saying that light and even skin tones are “the most sought-after beauty desire across Asia and parts of Africa and Latin America.” It removed before and after images from its packaging in 2019, but has now bowed to pressure by announcing it will drop the word “Fair” from its popular skincare range.

Johnson & Johnson announced last week that it would no longer sell its skin-lightening products in Asia, the Middle East and India. It said some of its product names and claims “represent fairness or white as better than your own unique skin tone,” and that this was “never” their intention.

The Black Lives Matter protests which were sparked after the police killing of George Floyd in Minnesota in May have seen dozens of brands make moves to cleanse themselves of any controversial product names and logos, with Uncle Ben and Aunt Jemima among those culled. 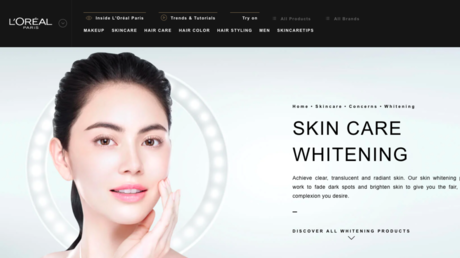