As Western governments opened their checkbooks for the White Helmets – a controversial ‘rescue organization’ in Syria – their co-founder used the cash to top up his wage and even finance his wedding, according to a Dutch report.

Days before he plunged from a window in Istanbul to his death last year, White Helmets co-founder and British mercenary James Le Mesurier admitted to defrauding Mayday Rescue, an organization that fundraised for the anti-government rescue group in Syria.

According to documents seen by Dutch newspaper De Volkskrant, Le Mesurier told an accountant sent to audit the charity’s books that he forged receipts for $50,000, pretending that it was sent to finance an evacuation operation in Syria. Instead, the money was paid to Le Mesurier himself. In addition to paying himself a salary of €24,000 ($27,414) per month, Le Mesurier dipped into company cash to finance a lavish wedding in Istanbul in 2018, and to issue loans to his new wife, former diplomat Emma Winberg, the report claims.

The accountant sent to investigate Mayday found that “tens of thousands of dollars in cash” were withdrawn to pay for the “fairytale wedding.”

Meanwhile, governments across the Western world were lining up to support Mayday, and channel money to the White Helmets. According to a 2018 report by the Dutch Ministry of Foreign Affairs, the organization took in $127 million between 2014 and 2018, with only $19 million of this haul coming from non-state donors. The government of the Netherlands paid out almost $11.5 million in this period, while similar donations flowed in from Germany, Great Britain, Canada, Qatar, and others.

Despite being hailed as fearless rescue workers, the White Helmets have been accused of partnering with Al-Qaeda. Operating exclusively in rebel-held territory, the group’s members have been photographed posing with jihadists and have been accused of staging chemical weapons attacks to draw in Western forces against Syrian President Bashar Assad.

Le Mesurier’s death was deemed a suicide by Turkish authorities. Shortly afterwards, a number of countries that had donated to Mayday demanded an accountant have another look over the organization’s books. According to De Volkskrant, this probe found that most of Mayday’s financial records are “missing.” Donations were not just handed to the organization in Amsterdam and forwarded to Syria, but distributed through a network of commercial organizations in Turkey and Dubai.

In a letter to donors, Le Mesurier admitted to swindling them out of their cash, but maintained the fraud wasn’t committed on purpose. After these donors discovered their cash had disappeared, they kept the inquiry into Mayday secret, De Volkskrant reported.

The Dutch government pulled its funding from Mayday Rescue almost a year before Le Mesurier admitted the fraud and killed himself. The government in The Hague will not transfer a final subsidy of more than €57,000 ($65,200) to the organization, while Germany is attempting to claim nearly €50,000 ($57,200) back. Cor Vrieswijk, Mayday’s new administrator, told De Volkskrant that the charity will be dissolved in the coming months.

President Assad claimed last November that Le Mesurier’s death was no accident, stating in an interview that the former soldier and mercenary may have been killed because he “knew major secrets.” What Le Mesurier may or may not have known is anyone’s guess, but his death and the subsequent investigation into Mayday has not dried up the White Helmets’ funding.

The group is reportedly receiving subsidies from Western governments through other organizations. At present its members are occupied with fighting the coronavirus outbreak in Syria. However, that hasn’t stopped its leadership from lobbying the US government against Assad and pressing for the maintenance of sanctions, even amid the pandemic. 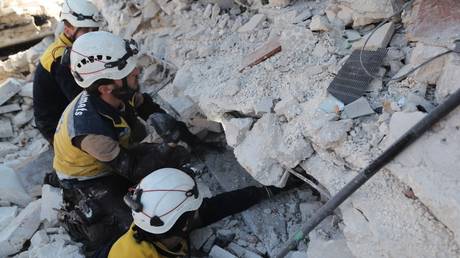