New research has revealed that white dwarf stars are a key source of carbon in the Milky Way and other galaxies – and that the chemical is crucial for sustaining human life on Earth.

Carbon is the main component of so much in our world, from DNA and muscle tissue to proteins, fats and sugars. All carbon atoms in the universe are made by stars, but astrophysicists debate whether the primary source of carbon is made when stars turn into white dwarfs or when massive stars explode as supernovae. A white dwarf is the core left after a dying star has shed its surface into the stellar winds.

A team of astronomers led by Professor Paola Marigo of the University of Padova, in Italy, analyzed newly discovered white dwarfs in open star clusters in the Milky Way. They found that their mass was larger than expected.

The bigger a white dwarf, the bigger the star that produced it tends to be, too. The relationship between the two masses of the progenitor, or original star and its white dwarf is called the initial-final mass relation, and the researchers described what they found as a “kink” in that relationship.

“Our study interprets this kink in the initial-final mass relationship as the signature of the synthesis of carbon made by low-mass stars in the Milky Way,” Marigo said.

The team found that a star has to have a minimum mass to spread carbon-filled ash into the galaxy as it dies. “Now we know that the carbon came from stars with a birth mass of not less than roughly 1.5 solar masses,” explained Marigo.

“The findings pose new, stringent constraints on how and when carbon was produced by stars of our galaxy, ending up within the raw material from which the sun and its planetary system were formed 4.6 billion years ago,” said the study’s co-author, Jeffrey Cummings, an associate research scientist at Johns Hopkins University.

Looking at similar stars in other galaxies gave the researchers an insight into the timing of precisely when dying stars dust the Milky Way with carbon, and that made it apparent that the white dwarf progenitors were the most likely source. The question of how carbon is spread throughout the universe has perplexed astrophysicists for decades, but now we know: it’s expiring stars that breathe life into Earth. 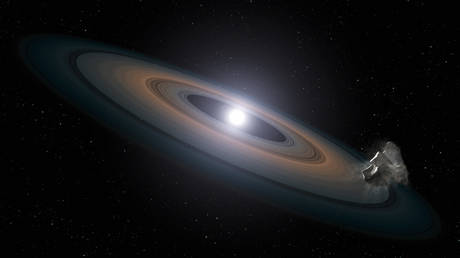