With Covid-19 still blighting the EU, the bloc should have bigger fish to fry, but they find time to bash Hungary’s “undemocratic” conduct during the crisis, Budapest’s chief diplomat told RT.

Hungary has long been at loggerheads with Brussels over a range of topics, from taking in migrants to EU budget policy. In the spring, a new spat broke out, this time involving the so-called “state of danger” laws that enabled Prime Minister Viktor Orban’s government to rule by decree.

Orban repeatedly argued that the crisis-time legislation, now lifted by parliament, effectively helped Hungary become a safe haven in the middle of the epidemic. His critics at home and abroad claimed it eroded Hungarian democracy and ran contrary to “Western values.” EU heavyweights including Germany have even threatened “financial implications” over the measures.

To Peter Szijjarto, the Foreign Minister of Hungary, this is all part of a pattern that’s been developing for some time. “Since we have been in office, we are always lectured by everybody,” the diplomat told RT in an exclusive interview,

Western European countries and Nordic ones – sometimes I have a feeling that they feel it is homework for them, or a sport, or hobby to lecture the Hungarians, to tell us how to live, how to govern, how to behave and how to act.

Szijjarto said he struggled to understand the EU’s position. “I have even asked the Danish, the Finnish the Dutch foreign ministers during the crisis when they were complaining about some chapters of the Hungarian corona law… how is it possible that you have time for that?”

Budapest, the foreign minister says, has more pressing issues to tackle than scrutinizing its neighbors’ deeds, as the government is busy working round the clock on acquiring protective equipment and ventilators, keeping businesses afloat and seeking a way out of the crisis.

“I told them – look, you need to have at least 26 hours a day. I have 24 but I don’t have time to deal with your [domestic] issues,” the foreign minister said.

There were hundreds of thousands of people infected in Europe, tens of thousands dying, millions losing their jobs, and the most important issue for Nordic and Western European political leaders is the Hungarian corona law.

Hungary swiftly enforced a strict lockdown early in March, not long before the coronavirus started its rampage through Europe, overwhelming national healthcare systems. The Central European nation has just over 4,120 cases and 577 fatalities, numbers that pale in comparison with Italy, the UK, or Spain.

Szijjarto said Covid-19 is a crisis the likes of which the EU has never had to deal with. Each European country had to go it alone based on their own national response plans, whereas “coordination from Brussels remained insignificant.”

As an example, Szijjarto said EU member states and their agents “were fighting each other in China [over] who can buy what equipment.” He stopped short, however, of bashing any EU institution for the lack of coordination “because I cannot say whether it would have been possible or it was totally impossible.”

Szijjarto also believes Orban’s right-wing Fidesz party – which has won three national elections since 2010 by a large margin – remains an eyesore for those in the mainstream liberal camp. 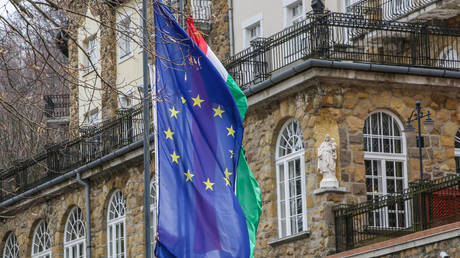