The Chinese Foreign Ministry has dismissed an Australian Strategic Policy Institute (ASPI) publication that claims Chinese policies have led to a sharp decline in birth rates in Xinjiang. Beijing advises a review of the facts.

Speaking on Thursday, Chinese Foreign Ministry spokeswoman Hua Chunying questioned the reliability of the Australian think tank and how it came to its conclusions.

“I don’t know the paper made by the Australian Strategic Policy Institute. The so-called Xinjiang birth rate has dropped by 48.74%. Where did this conclusion come from?” she asked, adding that ASPI “fabricates data and distorts facts.”

Hua said the Uighur population of Xinjiang, a predominantly Muslim people whom the West claims are the subject of genocide by Beijing, has continued to grow year on year. “From 2010 to 2018, the Uighur population has grown 25%, which is significantly higher than the 2% increase in the Han population,” she stated, adding that, over the past 40 years, the number of Uighurs in Xinjiang has more than doubled.

ASPI claimed in its publication on Wednesday that there had been an “unprecedented and precipitous drop in official birth rates in Xinjiang since 2017,” when Beijing allegedly commenced a campaign to control rates in the region. The group says birth rates there fell by nearly half from 2017 to 2019.

Data from China’s census has been widely evaluated and reported on by the Western media, which claims the country’s lack of population growth over the past decade is a sign that Beijing is faltering.

The census showed that, in the past decade, the population of mainland China increased by 5.38% to 1.41 billion. However, it is widely expected to decline in the coming years. The average growth rate of 0.53% is the slowest since the 1950s. 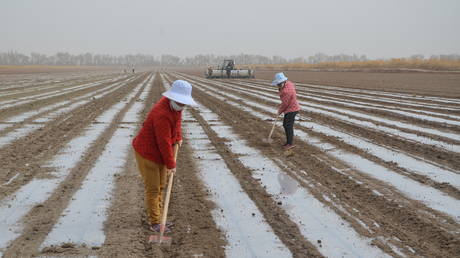