The Dogecoin cryptocurrency has surged in value by 20 percent in just one week, after a viral TikTok challenge urged users of the popular app to buy in and push its value to $1.

Dogecoin (DOGE), famed for being forged with the ‘Doge’ internet meme in mind, went up in value by nearly 20 percent over the past week – and it has been fluctuating wildly over the past 24 hours, all thanks to a challenge that took off on TikTok.

The #DogecoinTiktokChallange video was posted by user ‘jamezg97’ and has been viewed nearly half a million times as of Tuesday.

“Let’s all get rich!” the poster urged viewers, noting that Dogecoin is “practically worthless” at the moment, but saying the 800 million TikTok users could change that. “Once it hits one dollar, you’ll have $10,000. Tell everyone you know,” he said.

Despite being created as a “joke” by United States-based programmer Billy Markus in 2013, Dogecoin has since found followers all over the internet.

Dogecoin might be my fav cryptocurrency. It’s pretty cool.

Musk posted another nod to Dogecoin in March 2020, causing the meme-ish currency to increase five percent in value – but the price bump was short-lived.

Whilst undoubtedly steeped in humor, it is unclear whether or not the TikTok challenge is simply another classic ‘pump-and-dump’ scheme, wherein plotters organize to artificially inflate the value of a currency which they then sell for profit. 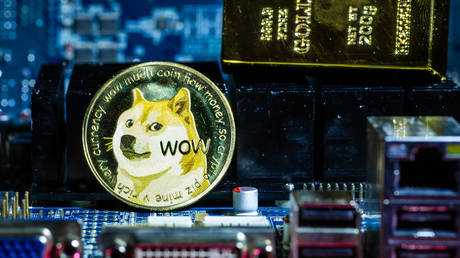