When size does matter: Germany slashes over 100 MP seats to avoid ‘XXL Bundestag’

When size does matter: Germany slashes over 100 MP seats to avoid ‘XXL Bundestag’

One of the largest elected chambers in the world, the German Bundestag, is set to become less crowded under a hard-earned deal that saw the ruling coalition agree to cut the number of MPs in the next few years.

The coalition, which merges conservatives from the Christian Democrats (CDU) and Christian Social Union (CSU) into a shaky alliance with the center-left Social Democrats (SPD), came to an agreement late on Tuesday, following several hours of talks behind closed doors.

What they came up with is an electoral reform that will slash the number of constituencies from 299 to 280 by the 2025 election, hence reducing the number of seats in the Bundestag. The final deal, which was “difficult” to reach, will see the growth of the German parliament “dampened,” as CDU head Annegret Kramp-Karrenbauer put it.

The bloated Bundestag currently accommodates 709 lawmakers, and its size has become a matter of concern for politicians. Theoretically, the parliament has 598 seats, but Germany’s electoral system allowed it to balloon in size.

Germans normally cast two votes at parliamentary elections, one for a local MP, and one for a party of their choice. The second vote defines the relative political weight and strength of parties, and this is the trickiest part. If a party wins more seats than it’s entitled to under their share of that vote, it is allowed to keep them to preserve proportionality in the Bundestag.

This saw the number of MPs increase over the years, with local media predicting their cohort could soon reach 800 – a phenomenon colloquially known as the ‘XXL Bundestag’. Likewise, the costs of maintaining the lawmakers’ offices and their staff have gone up, reaching €1 billion ($1.2bn) this year, according to estimates.

Staggering costs aside, the outsized Bundestag has had to squeeze office space inside the historic Reichstag building in Berlin, prompting parliamentary bosses to commission a container complex where some MPs – or their staff – have to work.

Top politicians in Berlin hailed the new development. CSU leader Markus Soeder said the talks were “somewhat tough” but that a “fair compromise” had been reached. In turn, SPD chief Norbert Walter-Borjans believes “the brakes will be applied” to make the Bundestag “smaller than before.”

Critics insisted, however, that the changes were cosmetic and lacked substance. The liberal Free Democrats doubted the reform would eliminate the risk of the ‘XXL Bundestag’, while the Greens said it was “unbelievable” that it took so long to simply decrease the number of seats.

Meanwhile, the German Taxpayer Union, which campaigns against the oversized parliament, called the news “a giant bluff” that will only cement the coalition’s rule. Those running the country “are miles away from a real reform of our complicated electoral law, and the voters deserve something else,” it proclaimed. 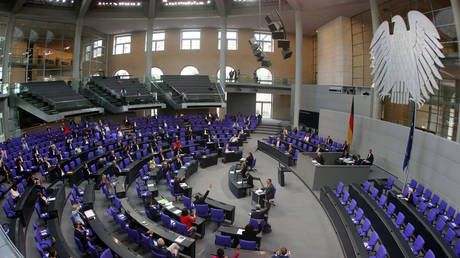