Facebook and its WhatsApp messenger have suspended the processing of law enforcement requests for the data of users from Hong Kong. Both cite concerns over “human rights” in the wake of the new Chinese national security law.

WhatsApp has “paused” the processing of reviews “pending further assessment of the impact of the National Security Law, including formal human rights due diligence and consultations with human rights experts,” the company’s spokesperson said in a statement as cited by media.

Later in the day, its parent company suspended requests from Hong Kong police as well.

“We believe freedom of expression is a fundamental human right and support the right of people to express themselves without fear for their safety or other repercussions,” Facebook said in a statement cited by media, promising to consult “human rights experts” on the issue.

Facebook has a dedicated online channel for security agencies through which they can request data on users they believe may have violated the law. Still, it was not immediately clear whether Hong Kong officials have made any inquiries under the new law or not.

The decision of Facebook and WhatsApp follows a similar move by another encrypted messaging app, Telegram, which said it will not disclose Hong Kong users’ identities to the government. Telegram also explicitly stated it had “never shared any data with the Hong Kong authorities in the past.”

We’d announce that we’re stopping too, but we never started turning over user data to HK police. Also, we don’t have user data to turn over. https://t.co/BBb8BYmW61

The national security legislation for Hong Kong was adopted by China last week. The law created a new security agency for the autonomous city, which can prosecute crimes such as secession, subversion, and terrorism, with the possibility of life in prison.

On Friday, Hong Kong police said that the first individual was prosecuted under the new law. “A 23-year-old local man has been charged with one count of inciting others for secession and one count of terrorist activity,” they stated. The suspect allegedly rode a motorbike at Hong Kong police.

China’s autonomous region of Hong Kong, which reunited with the mainland 23 years ago after decades of British colonial rule, has endured months of unrest. The protests were sparked by the now-withdrawn extradition bill, which would have allowed suspects to be handed over to the central government. The protests outgrew the issue of the bill, turning into broad anti-government demonstrations that received strong support from the West, and the US in particular.

The national security legislation, designed to tackle secessionist and terrorist threats, added fuel to the unrest. The law has been slammed by the US, UK, and other Western powers, with British PM Boris Johnson branding it a “serious breach” of London’s agreement with China of how the autonomous territory should be governed under the ‘one country, two systems’ formula. Beijing, however, says the law is necessary to maintain security in the region and has called upon the foreign powers to stop interfering in its domestic affairs. 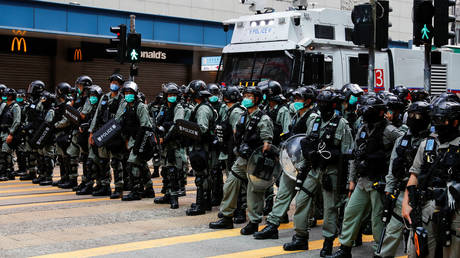