What’s long and fast, and can run if there’s an earthquake? Japan’s newest bullet train

What’s long and fast, and can run if there’s an earthquake? Japan’s newest bullet train

Japan has launched a speed-record-breaking new Shinkansen, or bullet train. Not only is it more comfortable than previous models, but it can also run without external power during an emergency, albeit only for a short distance.

The N700S is the latest incarnation of Japan’s famous bullet train, the name of which references its immense speed capabilities. It was intended to be put into operation for the first time during the Tokyo Olympics, but when the 2020 competition was postponed due to the Covid-19 pandemic, the Central Japan Railway Company (known as JR Central) decided to launch it anyway.

Train enthusiasts flocked this week to Tokyo Station, where Shin Kaneko, the company’s president, led the ceremony to mark the first commercial departure of a N700S. Fittingly, the new model made its inaugural journey on the Tokaido Shinkansen, Japan’s first bullet-train line.

JR Central plans to boost its fleet of N700Ss to 12 during the current fiscal year, and to 40 by 2022. The “S” in its name stands for “Supreme”. The 16-car model has an improved active-suspension system that delivers a quieter and smoother ride, and a new emergency-braking system.

The train is also fitted with lithium batteries, which allow it to move without an external power supply, if, for example, there’s an outage caused by an earthquake. The batteries allow the train to move away from a dangerous part of the route, such as a bridge or a tunnel, and possibly even reach the safety of the nearest station.

The N700S also has a reworked interior, which includes seats with individual power outlets, baggage racks with lighting that is automatically turned on during each scheduled stop, and other quality-of-life improvements.

Bullet trains are a point of national pride for Japan and a field of competition with China, which has developed its own impressive network of high-speed trains. During trials last year, the N700S hit speeds of 360kph – a record for Shinkansen trains. Chinese CRH3 trains, meanwhile, have clocked up 400kph on test tracks.

The world record for commercial trains running on steel wheels is 574.8kph – a feat achieved by France’s TGV 4402 back in 2007. In practice, however, high-speed trains run at lower speeds during regular operation in every country that deploys them. 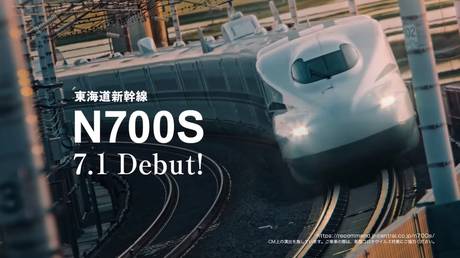 Not every incident in Iran 'n...