A regional delegation will visit Mali after leaders of the 15-nation West African bloc demanded that the junta return ousted President Ibrahim Boubacar Keita to power.

The Economic Community of West African States (ECOWAS) suspended Mali from its decision-making bodies and shut off borders with the country in response to Tuesday’s overthrow of Keita.

The heads of state will dispatch a delegation including former Nigerian president Goodluck Jonathan, according to Niger President Mahamadou Issoufou, the acting ECOWAS president. It’s not clear whether any military action has been considered, but Niger’s statement also called for the ramping-up of ECOWAS’ standby military force.

News of the delegation comes as the M5-RFP coalition of opposition groups in Mali joined the junta in rejecting foreign interference. The coalition spearheaded protests against Keita before the coup.

“They can come but we are not going to move,” Cheick Oumar Sissoko, a coalition leader, told reporters. “We are going to cross ECOWAS’ red line.”

Opposition leaders said they would hold a rally in Bamako on Friday to celebrate their “victory.”

Residents of Bamako expressed widespread support for the coup, reports say, and the capital was calm for the second straight day.

On Wednesday, Colonel Assimi Goita, a special forces commander, presented himself as the junta’s leader. Analysts say the senior mutineers were all respected army colonels who had fought in the north, where militants affiliated with Al-Qaeda and Islamic State (IS, formerly ISIS) are active.

A UN human rights team visited Keita and other detainees late on Thursday, the UN peacekeeping mission, MINUSMA, said. The junta then reportedly released two senior government officials who were detained during the coup, and held consultations with political leaders about creating a transitional authority. 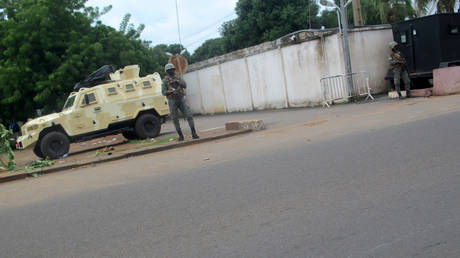