Pyongyang would gain nothing by setting up a third US-North Korea summit as Washington is only trying to buy time and “calm us down,” Kim Yo-jong has said after top American officials signaled an openness to talks.

North Korea has “nothing to gain from a negotiation with the US, and we do not even harbor any expectation about it,” Kim Yo-jong, the sister and close aid of Kim Jong-un, said in a wordy statement released by KCNA state news agency.

Such a meeting, if it were to be held this year, would play into the hands of the US and would be “unprofitable to us,” she argued. “We will only end up losing time again,” Kim warned, adding that another unsuccessful meeting would only impair “the special relations” between US President Donald Trump and Chairman Kim.

A host of high-ranked US officials, from Trump himself to Secretary of State Mike Pompeo, signaled in recent days that Washington is ready to restart denuclearization talks with Pyongyang before the end of the year.

However, Kim Yo-jong, who is believed to be the second-most-powerful figure in North Korea, suggested the US isn’t serious about it at all.

“The US only wishes to buy time, keeping the door open to dialogue and calming us down,” she suggested. However, she made it clear that Pyongyang may come back to the table if Washington changes its “hostile” stance.

The top official said Washington’s sanctions won’t make any difference in persuading North Korea into giving up nuclear weapons. Invoking her brother’s previous remarks, Kim Yo-jong pledged that “we shall never barter our system, the safety and future of our people for the likes of lifting of sanctions.”

Interestingly, the lengthy statement ended with a sort of a diplomatic curtsey to the American president. Kim Yo-jong said she was impressed by the recent July 4 festivities across the US, adding that the North Korean leader – who also wished Trump “great successes”– told her “to personally obtain, for sure, the DVD of the celebrations.”

Trump and Kim Jong-un met twice in 2018 and 2019, making history but producing no substantial results. Their first-ever meeting in Singapore set hopes high for mending ties, but the second one in Hanoi, Vietnam abruptly ended before the time came to sign a joint declaration.

The dialogue started to lose steam shortly after, although both sides stopped short of returning to full-fledged confrontation. 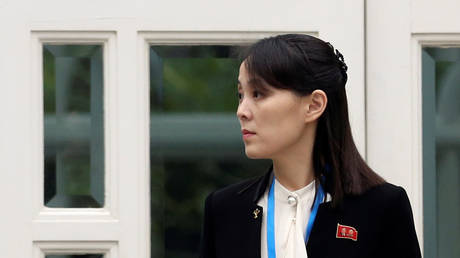