Italy on Wednesday imposed mandatory face-mask wearing outdoors across the country, in an effort to reduce coronavirus infections.

The cabinet agreed on the measure, which makes the wearing of face masks outdoors mandatory, amid a steady increase in new cases in the last two months, the health ministry said.

The decree will probably be effective from Thursday, and ministers have also approved a move to extend the Covid-19 state of emergency to January 31, a cabinet source was quoted as saying.

On October 3, wearing masks outdoors became obligatory in Rome and the Lazio region, amid a rise in new cases. The previous day, Italian PM Giuseppe Conte said that a similar nationwide move would be “evaluated.”

In the Lazio region, which includes the capital, Rome, those who fail to comply with the new restrictions will be fined up to €400. Wearing masks there is also compulsory indoors in public places, at all times.

Masks are already obligatory outdoors in Campania, Calabria, and Sicily, as well as some Italian cities, including Foggia and the historic center of Genoa.

Italy imposed a rigid lockdown between March and May. The country reported an average of more than 2,400 infections daily in the past week, according to a Reuters tally. 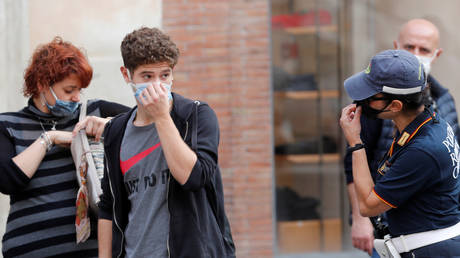