‘We won’t allow banditry on our continental shelf’: Erdogan says Turkey won’t back down amid Mediterranean standoff

‘We won’t allow banditry on our continental shelf’: Erdogan says Turkey won’t back down amid Mediterranean standoff

Turkey will not bow to international pressure and “banditry” in the contested waters of the eastern Mediterranean, President Recep Tayyip Erdogan has said, promising to continue oil and gas exploration as planned.

Turkey’s Oruc Reis survey vessel will continue its work between Cyprus and the Greek island of Crete until August 23 despite mounting pressure and threats of sanctions, Erdogan said on Saturday.

We will never bow to banditry on our continental shelf. We will not back down against the language of sanctions and threats.

Ankara’s goal is to protect its “rights and interests,” Erdogan stressed, adding that the country is striving to do so “in every field at the most advanced level all over the world.”

Turkey has been locked in a tense naval standoff with its historic rival Greece, after Ankara pushed forward with its controversial oil and gas exploration plans in the eastern Mediterranean. Turkey believes it has exclusive rights to do so after it reached a deal last year with the UN-backed government in Libya. Still, other countries, including Turkey’s NATO ally Greece, see Ankara’s activities as an incursion into their waters.

Oruc Reis, which was sent to explore for gas off the Greek island of Kastellorizo this week, is accompanied by several Turkish military vessels, while the whole flotilla is shadowed by Greek navy ships. On Wednesday, warships from the two sides were even involved in a minor collision. Ankara has warned that Athens would “pay a heavy price” if Oruc Reis is attacked.

Aside from the possibility of an open armed conflict between two NATO nations, the standoff has seemingly sent the already cold relations between the EU and Ankara into a downward spiral. Austrian Foreign Minister Alexander Schallenberg, for instance, urged the bloc to rethink its approach towards Turkey, accusing it of creating a “dangerous and alarming situation” that may easily spin out of control. 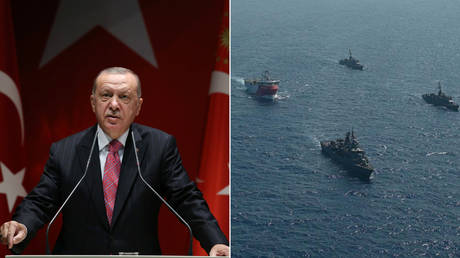