Close
Trending News
HomeWorld‘We will always be Australia,’ PM defiant after Beijing voices its grievances and warns against making an enemy of China

‘We will always be Australia,’ PM defiant after Beijing voices its grievances and warns against making an enemy of China

‘We will always be Australia,’ PM defiant after Beijing voices its grievances and warns against making an enemy of China

Australia’s Prime Minister says that Canberra will stand by its values and continue to act with its own interests at heart after China accused it of “poisoning bilateral relations.”

Prime Minister Scott Morrison said that Australia will not compromise its national security and its values as Beijing ramped up its rhetoric against Canberra.

We will always be Australia, act in our interests and in accordance with our values.

The PM was responding to an apparently deliberately leaked dossier from the Chinese embassy in Canberra, in which Beijing highlights 14 grievances and accuses Morrison’s government of “poisoning bilateral relations.”

Among other allegations, the dossier accuses Canberra of attempting “to torpedo” Victoria’s Belt and Road deal the Australian state signed with Beijing and blames the government for “unfriendly or antagonistic” stories in the independent media.

Morrison said that the dossier shows China is concerned by Australia’s sovereignty and fundamental values.

“If there are concerns… that Australia acting in our own interests, having a free media, having parliamentarians elected and able to speak their minds is a cause for concern, as well as speaking up on human right… then it would seem that the tension is that Australia is just being Australia,” the PM noted.

The PM also hit out at Beijing for making incorrect assumptions. He said that a defense pact agreed between Australia and Japan on Tuesday was very much in the national security interests of both countries and that it was not at the “behest of the United States” as the Chinese dossier indicates.

“We won’t be compromising on the fact that we will set what our foreign investment laws are, or how we build our 5G telecommunications networks, or how we run our systems of protecting against interference” Morrison told Nine Television in response to the allegation that Canberra had blocked 10 Chinese investments on national security grounds.

Trade disputes have been multiplying between the two countries recently, with China sanctioning Australian imports.

On Tuesday, Zhao Lijian, a Chinese foreign ministry spokesman, listed a number of complaints against Canberra including meddling in the national security legislation of Hong Kong, exploiting platforms like the Human Rights Council to act against China on accusation of human rights abuses in Xinjiang, and supporting Taiwan’s membership of the World Health Organization. 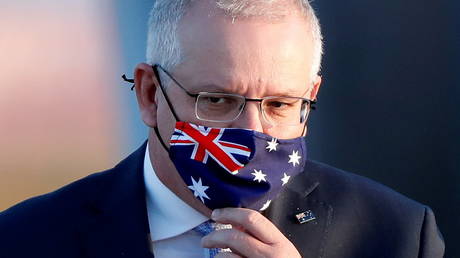