French law enforcement officers have picketed outside their stations around Paris after cops were ambushed by an armed mob. The demonstration comes amid longstanding tensions between the police and the French government.

Officers rallied in front of the headquarters of the Paris Police on Monday, where they held signs that read “Police under attack, citizens in danger.” In Champigny-sur-Marne, where the recent attack occurred, cops stood outside their station holding firearm training targets and placards that read, “Your security has a price. We want protection and recognition.”

The police station in Champigny-sur-Marne, a Paris suburb, was targeted by a mob of around 40 people armed with metal bars and firecrackers on Saturday night. Two officers standing outside the building during the attack managed to quickly run inside and barricade the doors before the armed group was able to assault them. The mob attacked the station’s entrance and damaged five police vehicles. The station was also subjected to a barrage of powerful fireworks.

The attack was reportedly in retaliation for a police check on a scooter driver, French media reported, citing the local mayor.

A #police station in the #Paris suburb of #ChampignySurMarne was reportedly attacked late on Saturday night by a group of people armed with fireworks and metal bars.

No casualties were reported, and an investigation into the incident is underway. pic.twitter.com/QfRES4beY4

The protest comes amid growing uneasiness between the police and President Emmanuel Macron’s government, which has been accused of throwing law enforcement under the bus after allegations of racist policing and police brutality emerged earlier this year.

French Interior Minister Gerald Darmanin is set to meet with police unions tomorrow to discuss their grievances, while a similar summit is expected with Macron later this week.

French police unions have been warning for months about an alleged uptick in violence against cops in the country. Days before Saturday’s attack, two plainclothed officers were pulled from their vehicle in a Paris suburb and shot multiple times with their own weapons. One of the officers remains in serious condition.

Last October, French police held a ‘March of Anger’ rally in Paris to protest budget cuts that have stretched the force to its limits. Last year it was reported that France’s overworked police force was suffering from a suicide epidemic. 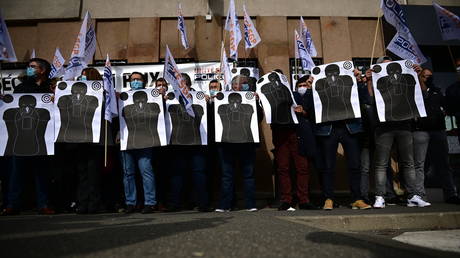