‘We voted, we won’: Activists rally & clash with police in Barcelona on anniversary of 2017 Catalan independence vote (VIDEOS)

‘We voted, we won’: Activists rally & clash with police in Barcelona on anniversary of 2017 Catalan independence vote (VIDEOS)

Pro-Catalan independence activists have demanded Spain respect the results of the 2017 referendum, which was ruled unconstitutional by its top court. Fifteen people were detained in Barcelona after police dispersed the crowd.

Hundreds of activists gathered on the Placa de Sant Jaume square in front of the regional government building in downtown Barcelona on Thursday night. Chanting “We voted, we won,” they demanded respect for the results of the 2017 independence vote and rallied in support of Quim Torra, the head of the Catalan government, who was ordered to step down by Spain’s Supreme Court.

The protesters then marched towards a police station, moving around a dozen large waste containers into the middle of the street and setting them on fire. Officers in full riot gear responded by dispersing the crowd.

VIDEO: Protests in Barcelona on the 3rd anniversary of a banned referendum on Catalan independence, and just three days after Spain’s top court upheld a ruling disqualifying the region’s separatist president from office pic.twitter.com/MtP1Qazec8

According to local media, 15 people were detained in Barcelona, and one was detained at a similar event in the town of Girona.

On Monday, the Supreme Court upheld an 18-month ban on Torra holding public office after he was found guilty of disobeying an order to remove banners supporting jailed pro-independence politicians from a government building.

The decision triggered large-scale demonstrations in solidarity with Torra.

In 2017, Catalonia held a referendum which yielded overwhelming support for the region becoming an independent republic. Officials in Madrid, however, argued that the vote was illegal, and the nation’s Constitutional Court ruled that the referendum had no legal force.

Several high-profile Catalan politicians were subsequently handed fines and prison sentences for their role in arranging the referendum, while some – like the former head of the Catalan government, Carles Puigdemont – left the country in self-exile. 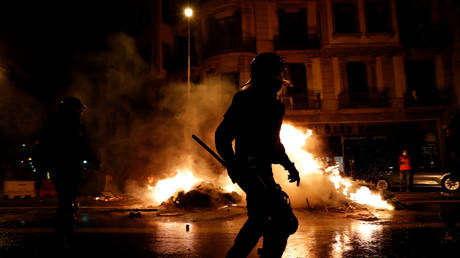 Smashed phone screens could be thi...