Scientists have found it is possible to produce water by heating interstellar organic matter, leading to the theory that life from space was the cause of water on Earth, casting further doubt on the idea that it came from ice.

Water is essential to life on Earth; without its soluble qualities, the chemical reactions prerequisite to life would never have taken place.

Until now, terrestrial liquids had been explained as a consequence of icy comets or meteorites careening down to Earth carrying hydrous silicates that form outside of the ‘snow line’ – the boundary beyond which ice can condense due to low temperatures.

However several studies have put these theories on ice, explaining that if this were the case, it would be expected that our planet’s oceans should have roughly the same chemical makeup as these intergalactic travellers. In short, they do not.

That does not mean the mystery of life on Earth has been solved – far from it, in fact. But now, thanks to new research from Hokkaido University, scientists have found that heating interstellar organic matter, known as ‘precometary organic matter’, at a high temperature can yield abundant amounts of water and oil. The findings were published in the journal Scientific Reports.

“Until now, much less attention has been paid to organic matter, compared to ices and silicates, even though there is an abundance inside the snow line,” says planetary scientist Akira Kouchi at Hokkaido University.

This means that, in theory, water can be created inside the snow line, explaining away the need for comets or meteors.

Researchers made the discovery after gradually heating up organic matter analog from 24 to 400 degrees celsius under a pressured condition. At around 400 degrees, water droplets appeared.

Evidence of black oil was also discovered and, after later chemical analysis, proved to be similar to that found beneath the Earth.

The results showed that “interstellar organic matter inside the snow line is a potential source of water on the Earth,” says Akira Kouchi, adding that samples from the asteroid Ryugu, which Japan is currently harvesting, should help cement the new theory further. 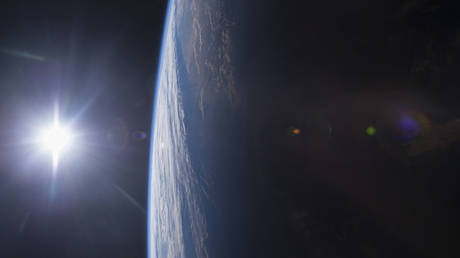