A blaze has broken out in one of the World Trade Center’s towers in the capital city of Nigeria, Abuja. Footage from the scene shows a large plume of smoke billowing from the building’s top floors.

The fire ignited at the massive tower, which is still under construction, on Monday. The flames triggered a large emergency services response as firefighters scrambled to extinguish the blaze.

Videos from the scene show a large column of gray smoke rising over the building, though open flames can’t be seen.

No information on potential casualties has emerged so far, and the company managing the facility said the fire was put out before causing significant damage. According to local media citing eyewitnesses, the blaze was likely caused by a short circuit in construction equipment.

The development of the World Trade Center began back in 2010, and the massive project was originally scheduled for completion in 2013. The complex, said to cost around $1 billion, was designed to include six towers, a mall, and a hotel, but still remains under construction.

The site saw another major accident in 2014, when a construction crane collapsed and badly damaged glass cladding on one of the towers. Luckily, no one was injured, as the collapse occurred when workers were not on the site. 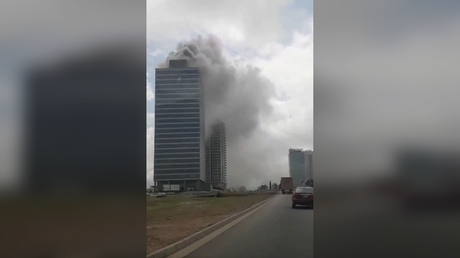 The moon is 85 MILLION years young...