Protests have broken out across the Ugandan capital Kampala following the detention of presidential candidate, Bobi Wine, on the campaign trail. The popstar-turned-politician is the main challenger to incumbent Yoweri Museveni.

Videos emerged online on Wednesday morning of Wine, whose real name is Robert Kyagulanyi, being bundled into a van by a large group of well-armed Ugandan police.

He was reportedly arrested for having more than 200 supporters in attendance – the limit recommended by the Electoral Commission to contain the spread of Covid-19.

Here is Bobi Wine, Ugandan Presidential candidate, being arrested by over 100 Police officers from the Antiterrorism unit. The way Museveni gets away with this without the West and the AU calling him out beats logic. #freebobiwine pic.twitter.com/oQO2nuRWcn

The popular musician, who was reportedly campaigning in the eastern provinces when he was arrested, wants to oust long-serving Museveni – in power for 34 years – in the January 14 election.

Kampala has fallen into “total chaos” following the arrest, according to Evarest Kayongo, the chairman of the Kampala City Traders Association. “The streets are empty… We have closed business because of tear gas and bullets,” he told reporters.

Footage shared on social media from Kampala showed fires in the streets, and protesters clashing with police and looting. Some purportedly showed a demonstrator lying motionless on the road after being shot by police, while another Twitter post said a local vendor had been killed.

Kampala on fire, following the arrest, in Luuka, of presidential candidate Hon Robert Kyagulanyi (BOBI Wine). The protests are spreading quickly to other urban centres.

Many people have, reportedly, been short dead by the Police and Military in various parts of the city. pic.twitter.com/EFSZAdZfx2

Many reports have circulated claiming heavy-handed policing. Politician and former army officer Kizza Besigye Kifefe cited reports that the police and military had shot and killed demonstrators across the capital while a local journalist shared a photo of the devastation caused by the protest, adding that officers had confiscated reporters’ cameras.

Another video appears to show a police van stopping to allow an officer to shoot at demonstrators on a balcony.

Police is using live bullets and bombs to disperse peaceful protesters in Kampala. Kindly retweet for the world to see😭😭😭#StopPoliceBrutalityinuganda #freebobiwine #WeAreRemovingADictator pic.twitter.com/9UjfN9QDgA

A police officer shoots at the people who were standing on the balcony to witness Bobi Wine-induced demonstrations in Kampala. #NilePostNews #NBSUpdates pic.twitter.com/GT9M0KTfke

Reports suggest that presidential candidate Patrick Oboi Amuriat of the Forum for Democratic Change (FDC) was also arrested on Wednesday.

On Monday, the EU confirmed it would not deploy an observer mission to the election in January. After considering whether Uganda had made progress on previous recommendations, they decided against sending a team of monitors, EU ambassador and head of delegation to Uganda Attilio Pacifici told Reuters.

This is not the first time Wine has been arrested. In 2018, the popstar-cum-politician was detained for possible charges of unlawful possession of firearms and incitement to violence, while in 2019 he was arrested and accused of leading a protest against the government. 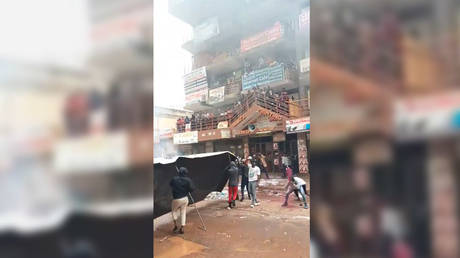