Volleys of celebratory gunfire were heard across the Afghan capital to mark the complete withdrawal of American forces after a bloody 20-year conflict, with the newly reinstalled Taliban government declaring “full independence.”

“There’s a lot of gunfire,” RT’s senior correspondent Murad Gazdiev reported from Kabul in the early hours of Tuesday morning, speaking over the din of small arms popping off in the background. “This gunfire isn’t violent, there are no clashes – in the capital the Taliban are celebrating.”

Everywhere, tracer rounds flying into the air in their thousands. The Taliban is celebrating victory, after 19 years, 10 months and 25 days, of the Afghan war, the US war in Afghanistan.

Just listen to the intensity of the celebratory gunfire in Kabul.

Going to be fun trying to sleep tonight pic.twitter.com/Jbq48O5WIg

The raucous celebration erupted as a massive, weeks-long US evacuation effort finally came to a close, ending America’s longest war, which expended tens of thousands of lives and trillions of dollars over nearly two decades. With the American pull-out complete, Kabul, and indeed the majority of Afghanistan, are again under Taliban rule, just as they were prior to the US invasion in 2001.

“The airport is now under the control of the Taliban,” Gazdiev added. “That is where the gunfire started, it has spread now throughout the city – machine guns, rifles firing into the air, red tracer rounds streaming into the air.”

I get the sense the Taliban expended more ammunition on celebration than on actual combat over the past month.

Videos capturing barrages of gunfire have circulated online, with shots heard for miles around the Afghan capital as people cheered on the American exit.

VIDEO The sound of gunfire is heard across Kabul and fireworks can be seen in the sky early Tuesday after the US military confirmed the last US troops had left Afghanistan, ending a 20-year war pic.twitter.com/HJ8E6PqdQs

The Taliban has also joined in on the celebration, with spokesman Zabiullah Mujahid declaring that “The last American occupier withdrew… and our country gained its full independence.” Earlier, the representative clarified that the “sounds of gunfire in Kabul are shots of joy at the withdrawal of US troops,” assuring Afghans they should not be “worried.”

Residents in Kabul city tells me, “ Tonight, Taliban gunfire in Kabul to celebrate withdrawal of US from Afghanistan.” pic.twitter.com/O1GKqDnh1i

A day of celebration for Taliban fighters was a more solemn one for the departing American forces, however, as some US citizens and allies remain trapped in Afghanistan after a hastily arranged evacuation effort – marred by a deadly suicide bombing outside the Kabul airport earlier this week – failed to bring all to safety.

“The United States leaves in a sad state, because many American citizens, never mind the citizens of US allies… they are still stuck in Afghanistan,” Gazdiev said. “People with passports, we saw them today in Kabul city center. The crowds packed around the airport, they were full of people with visas, with passports, desperate to get out of Afghanistan. They haven’t managed to make it.”

Had to climb on to the roof… but yes.

Hundreds of tracer rounds are streaming into the sky at the airport. Taliban evidently celebrating victory pic.twitter.com/qVfxMCZ6Ik

The Taliban, however, has assured that those stragglers will be allowed to leave the country once regular civilian flights resume at the Hamid Karzai International Airport, including Afghans who worked alongside US forces, despite being deemed collaborators by the new Taliban government. Though the group has so far appeared to facilitate evacuations, despite some turmoil and confusion at Taliban-run checkpoints around the airport, it remains to be seen whether it will make good on its assurances. 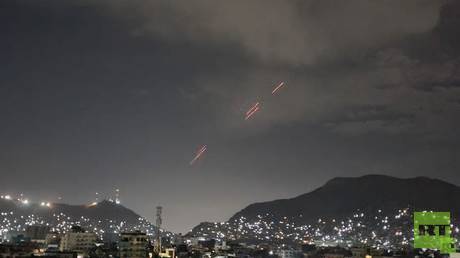