Mexican authorities scrambled fighter jets to hunt down a suspected drug cartel plane, but found it aflame on a jungle highway in the Yucatan. A truck packed with $4.9 million of cocaine was discovered nearby.

The jet arrived from South America on Sunday and was tracked as soon as it entered Mexican airspace. With military planes on an intercept course, the drug smugglers reportedly made an emergency landing on the jungle road and then torched the plane. A high ranking Quintana Roo state police official shared footage of the flaming aircraft from the scene.

The two air force jets tracked the plane and confirmed its landing site and coordinated helicopter cavalry troop deployments to the area to secure the aircraft and hunt down its crew.

Mexican broadcaster Milenio claimed that the plane had arrived from Maracaibo, Venezuela, but there has not yet been any official confirmation from authorities in Caracas confirming these reports. No arrests have been made, though the investigation is ongoing.

The plane is reportedly a decades-old BAe-125 15-seat passenger jet which can cost up to $1 million. This loss, in combination with the massive drug seizure, would have a “significant impact on the criminal organizations” involved, the Mexican military said in a statement.

The news comes amid escalating cartel violence in the country, most recently involving a gun assault on a drug rehab clinic in which at least 24 people were killed. 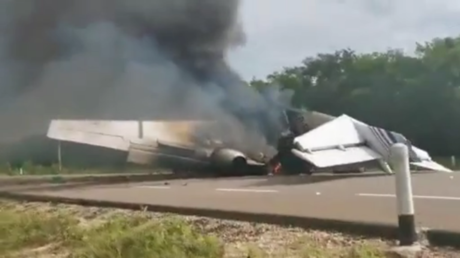 Beijing slams US for ‘flexing musc...