Using a powerful supercomputer, scientists have created 3D simulations of major planetary impacts, showing exactly how big a punch is needed to literally knock the wind (or rather, atmosphere) out of an entire planet.

With help from the COSMA supercomputer, researchers led by a team from Durham University tried to calculate the consequences of a cosmic KO punch as planets are still forming.

The higher-speed head-on collisions dealt far more damage – essentially obliterating the atmosphere in one fell swoop, taking large chunks out of the planetary mantle in the process.

The team ran over 100 detailed simulations of these massive impacts, altering the speed and angle of attack each time, with some truly awe-inspiring and terrifying results.

The simulations show how Earth-like planets might have regained and evolved their atmospheres following traumatic collisions with other high-velocity objects out there in space, with grazing shots causing far less atmospheric damage, and even on occasion producing satellites like our moon in the process.

The moon formed as a result of one of these collisions 4.425 billion years ago, with a Mars-sized protoplanet called Theia. According to the researchers, we got extremely lucky and only lost between 10 and 50 percent of our atmosphere during this brutal encounter.

This kind of analysis can help us better understand our own planet’s formation, as well as helping to inform our understanding of atmospheric development in relation to any future colonization candidates among the 4,000 or so exoplanets we have catalogued to date.

“We know that planetary collisions can have a dramatic effect on a planet’s atmosphere, but this is the first time we’ve been able to study the wide varieties of these violent events in detail,” said lead author Dr Jacob Kegerreis.

“[This] will help us to understand both the Earth’s history as a habitable planet and the evolution of exoplanets around other stars.” 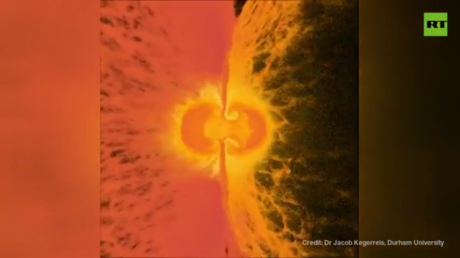