Researchers at the University at Buffalo have unveiled their novel 3D printing method with an incredible video showcasing what could soon be the future of rapid, artificial organ manufacture.

The research team’s incredible seven-second video, which is sped-up from 19 minutes, showcasing the printing of a hand, which would take a whopping six hours to create using conventional 3D printing methods.

“The technology we’ve developed is 10-50 times faster than the industry standard, and it works with large sample sizes that have been very difficult to achieve previously,” says the study’s co-lead author Ruogang Zhao, Ph.D., associate professor of biomedical engineering.

The technique is called stereolithography and makes use of hydrogels, a jelly-like substance which is used to manufacture diapers, contact lenses and, most importantly, scaffolds in tissue engineering.

The University at Buffalo team achieved centimeter-sized hydrogel models which, in turn, reduced the deformation of structures sometimes experienced in other 3D printing methodologies.

According to co-lead author, Chi Zhou, the team’s method would be ideal for printing cells with embedded blood vessel networks, a daunting prospect even now, but perhaps in the near future a more commonplace medical technology.

These advances in 3D printing are critical to the development of fully functioning 3D printed organs in a burgeoning crossover between the manufacturing and biomedical devices industries which could save countless lives around the world in the future. In 2018 alone, there were somewhere in the region of 146,840 organ transplants worldwide. 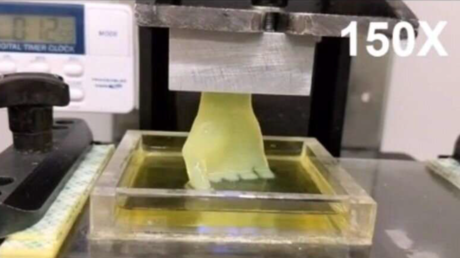