Israeli scientists have achieved a long theorized but never-before-seen phenomenon known as a “branching flow,” where light appears to branch out like a tree or the streams of a river delta.

“No one predicted this to happen,” says Mordechai Segev at the Technion-Israel Institute of Technology in Haifa, one of the team members behind the research. “It was a complete surprise in the lab.”

The flow of light changes as it passes through different media, in the same way refraction occurs when you submerge an object in water.

By passing the light from a laser through a soap bubble, the Israeli physicists have replicated an effect previously observed only in the flow of electrons, ocean waves, and sound waves, in an experiment which has implications for the study of relativity.

“Imagine that you can control the flow of a fluid by controlling the light passed through it,” Segev says.

To create the branching-flow effect with light, the structure of the medium – in this case, the soap bubble – needs to be somewhat random in nature, and the physical, spatial variations within the structure to be larger than the wavelength of the light flow itself. For the best results, the variations must also be smooth, making soap bubbles the perfect candidate.

Soap bubbles consist of a thin layer of liquid between two layers of molecules, combining the perfect degree of variability with just the right amount of smoothness to create the mesmerizing effect.

Micro disturbances across the bubble’s surface scatter the flow of light, splitting it into streams like a river delta, which then further split and so on.

However, adding to the complex setup required to achieve this modern magic, the laser light needs to shine precisely between the two layers. In order to guarantee this level of accuracy, the researchers inserted a fiber-optic cable into the soap-bubble membrane.

The team tested the soap-bubble laser technique on both stable and moving membranes by restricting the air flow around the bubbles, allowing them to witness the full beauty of white light splitting into multiple thicknesses and colours in their artificial “light delta.”

The researchers will now explore the possibility of creating branch flow in three dimensions – an aim that’s been hypothesized but not yet achieved. 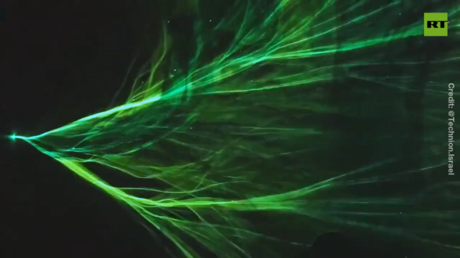