In a bid to highlight the effects of climate change, scientists at Pennsylvania State University have created a virtual reality forest, and invite “visitors” to check what kind of changes it might undergo due to climate change.

Researchers at the university combined a slew of data from climate change models, vegetation models and ecological models to recreate a modern-day forest to which they then applied two different future scenarios: a base scenario and a hot and dry scenario.

The myriad of data points were combined to accurately recreate the understory, or the shrubs and plants that grow beneath the main canopy, as well as the tree population of forests, which users can then explore in the present and in the virtually-recreated 2050.

Students are able to explore forests of tomorrow, see water flowing through the soil, and more through virtual reality technology at Penn State’s Center for Immersive Experiences. @PennStateCIE
https://t.co/LOmyyXNttY pic.twitter.com/L5AtBmmb8f

“The main problem that needs to be addressed is that climate change is abstract,” said Alexander Klippel, a professor of geography at the university.

Its meaning only unfolds in 10, 15 or 100 years. It is very hard for people to understand and plan and make decisions.

In particular, the team drew on LANDIS II – a landscape-scale forest ecosystem model for simulating fundamental ecological processes – and combined it with a procedurally-generated computer model to populate the virtual forest according to certain guiding ecological rules.

“Our approach to create visceral experiences of forests under climate change can facilitate communication among experts, policymakers and the general public,” the researchers reported.

Users are encouraged to compare and contrast which types of trees survive and thrive in each future scenario, with the aim of adding much perspective to climate change data and warnings in the present. 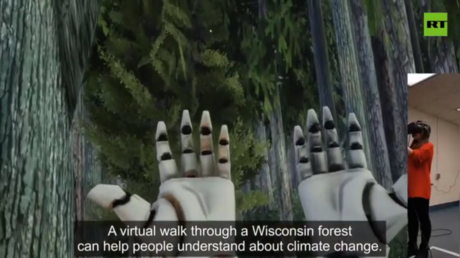