High-end Russian carmaker Aurus, best known for producing limos for the Russian president, has released a video showing its sedan ramming a barrier in a stunning test that left the crash dummies completely unscathed.

The footage published by Zvezda TV on Sunday features an Aurus Senat sedan. The luxury car – whose market price starts at 18 million rubles ($254,000) – can be seen slamming into a wall in one of the company’s hangars.

In a never-before-seen video, the 5.6-meter-long vehicle, equipped with a hybrid powertrain allowing it to accelerate from 0 to 100kph in approximately six seconds, hits an obstacle at a speed of 64kph (40mph). Although the car’s front is almost completely crumpled from the impact, the two crash test dummies in the front seats emerge intact from the head-on collision.

It’s not the first test of the Russian-made car brand to be made public.

Aurus Senat limos previously showcased their resilience to extreme cold in a January 2019 test, braving the Siberian winter, with temperatures dropping to as low as -50°C (-58°F).

The luxury cars, part of the Kortezh project, were initially designated for top Russian officials. A limousine of the line debuted during Russian President Vladimir Putin’s inauguration in May 2017. Since then, the automaker decided to make cars available to the general public both inside and outside Russia.

The long-anticipated serial production of the top-class cars is set to begin in 2021, although several pilot vehicles are expected to roll off the production line in November of this year.

While serial production of the vehicle is still a long way off, the car is already in high demand. Over 700 Aurus vehicles have been pre-ordered by affluent auto lovers since February 2018. 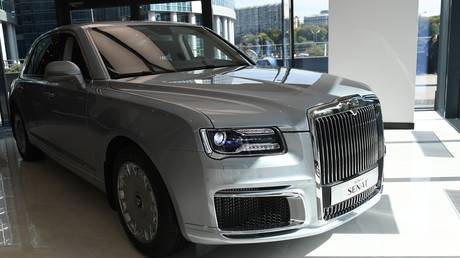 Stamp duty could be AXED by Rishi...

All of the Pokemon games in order: From Red & Yellow to Sword and Shield

‘We don’t know what the rules should be’: Cyclist who became woman predicts transgender decisions ‘won’t be done’ by 2024 Olympics

Funds investing in Russia raise $130 million in one week