The family of a 19-year-old victim of an alleged gang rape in India have accused local police of cremating the young woman’s body in the middle of the night without permission.

The woman died on Tuesday in Delhi’s Safdarjung Hospital, two weeks after being tortured during a horrific gang rape in Hathras, Uttar Pradesh. She suffered multiple fractures, paralysis and a deep laceration to her tongue.

The atrocious incident sparked a flurry of demonstrations with protesters outside the hospital reportedly chanting, “Hang the rapists.” There were scuffles between the assembled crowds and police in Delhi with several arrests made as the crowd burned effigies and demanded justice for the teenager and her family.

The woman’s remains were allegedly taken to her village in Hathras, about 200km from Delhi where she was cremated by policemen at 2:30am on Wednesday morning despite protests from her family and widespread public outrage at the case.

“We wanted the last rites to be performed according to the Hindu traditions. Despite our protests, the cremation was performed. They took the body forcefully. We couldn’t see our daughter’s face for the last time,” the woman’s father told NDTV.

Irate locals took to the streets to voice their anger at the authorities amid rumors of a botched investigation and a local government coverup.

The family will reportedly receive Rs 25 lakh ($34,000) in damages as well as other forms of remediation from the local government, including jobs and housing.

However, police claim the cremation was carried with family’s consent, alleging that the woman’s uncle gave permission and was present at the event.

Members of the community of #Hathras gang-rape victim, protest in the city demanding justice for her. The protesters also raised slogans against Police and local administration. pic.twitter.com/b3lIz9saMo

“We have videos of family members present there. I will be happy to share with media. We performed the cremation after the family’s consent. Some members of the family were present at the cremation. The media reports are not true,” District Magistrate Praveen Kumar Laxkar said.

Meanwhile, all four of the attackers, from an upper caste, have been arrested and are in jail. They are expected to be charged with the woman’s murder.

The family, from the Dalit community, the lowest caste in India, claims the local police initially accused the victim of lying about her injuries and registered the incident as an attempted murder case before additional rape charges were added later after the woman gave an official statement a week after the horrific assault occurred. 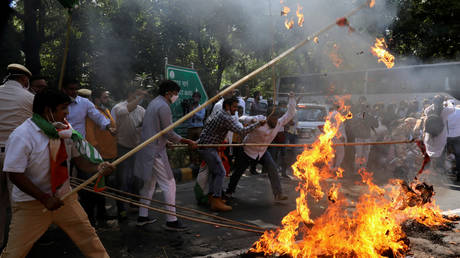 US applauds Germany for moving in...