Close
Trending News
HomeWorldWATCH: Police clear streets of Nantes with tear gas on 1yr anniversary of man’s death during crackdown on a party

Police tear-gassed groups of youths on the streets of Nantes, some of whom were attending the ‘Fete de la Musique’ event, while others were demonstrating on the first anniversary of the death of Steve Canico in a police crackdown.

Eyewitness footage from the scene shows large crowds sprinting away from police through the streets of Nantes as tear gas canisters rained down from the sky.

Thousands gathered throughout Sunday in a silent march in memory of 24-year-old Steve Canico who died at the music festival in 2019, after disappearing during a police baton charge and tear gas barrage along the banks of the Loire.

While the exact circumstances of Canico’s death have not yet been determined, many blame heavy-handed policing, as he and 13 others fell into the river during the clashes on the night of June 21, 2019. Canico could not swim and his body was retrieved five weeks later on July 29.

Several protests have been held in his honor in the year since his death, with many calling for ‘Justice for Steve’, a slogan which has appeared at several demonstrations since, including Yellow Vest marches.

The French Interior Ministry found a “lack of judgement” by police while investigating the case. The police chief overseeing the operation in question was demoted. Still, as the investigation is ongoing, no one has been held directly responsible for what happened.

There’s also a separate probe into “willful violence against a person holding public authority,” as 10 police officers were also injured during the 2019 clashes which broke out when authorities attempted to break up a late-night, open-air rave. 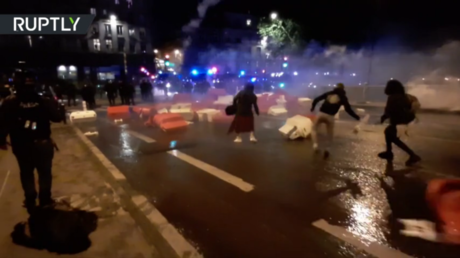