Athens police were bombarded with molotov cocktails and pelted with stones amid major protests against a new government bill limiting public gatherings.

Some 10,000 people had assembled to protest across the Greek capital. Shortly after 8.30pm local time, a group of some 200 agitators were gathered outside the parliament building in Syntagma Square, when all hell broke loose.

Irate protesters pelted cops with molotov cocktails, stones and bottles, prompting the police to respond in kind with volleys of tear-gas canisters and stun grenades. Eyewitness video from the scene captured the chaos as it unfolded.

Clashes in Athens during a big demonstration against a government’s new law posing restrictions on street protests. #Greece pic.twitter.com/D7DMA2m4en

There were similar protests in 40 other cities and towns, including Greece’s second-largest city, Thessaloniki, with protesters hurling stones and other debris at police.

“The right to hold peaceful gatherings must be protected … but it must be done in a way that will not interrupt the activity of an entire city,” Prime Minister Kyriakos Mitsotakis told parliament on the second and final day of the debate about the proposed bill.

The bill purports to regulate street demonstrations, which, the conservative government argues, both disrupt the public and affect business. Opposition leaders accuse the government of attempting to quash any potential unrest in the aftermath of the coronavirus pandemic.

The new legislation would restrict many demonstrations, and can include an outright ban if an event is deemed to threaten public safety.

Greece has yet to fully recover from the economic crisis of 2009, which ultimately led to three international bailouts and some of the toughest austerity measures witnessed in the wake of the 2008 global financial crisis. In the intervening years, street protests and clashes have become the norm.

“The government … dares boldly with a junta-inspired bill to promote new restrictions to quash and destroy a main democratic right, which our people conquered through bloody battles,” unionist Dimitris Karagiannis said before the vote. 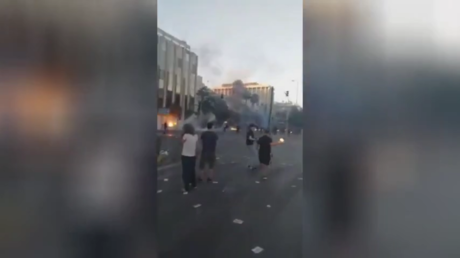