Firefighters and civil defense crews are scrambling to contain a massive blaze that erupted overnight in the Syrian countryside in the Latakia Governorate. A Syrian Army helicopter has been drafted in to assist the operation.

Massive wildfires engulfed the Syrian countryside near Latakia and local firefighters battled to contain the blaze. Local media outlets are describing it as a sudden “huge wave of fires” and report that it broke out at around midnight local time.

Eyewitness footage from the area shows the extent of the blaze, which continued to burn into Friday afternoon, filling the skies with thick smoke.

Severe dry eastern winds and rugged terrain are hampering firefighter efforts to reach local residents in Kalakho, according to Basem Duba, Director of the Forestry Department at the Directorate of Agriculture.

Hundreds of acres of citrus and olive groves have been reduced to ash, as the wildfire threatens local industry and food supplies, with some reports indicating the incident occurred near a local naval academy.

There have as yet been no official reports of casualties or of the extent of the damage caused, as the wildfire is still being contained. 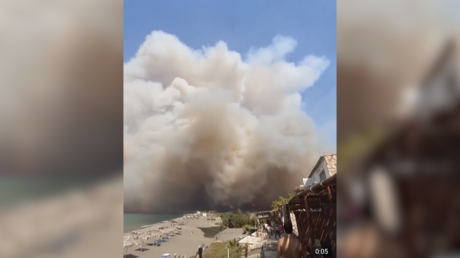