Video shows an Indian doctor in full protective gear risking his own life as he climbed out of the window to save a distraught Covid-19 patient who wanted to jump to their near-certain death after escaping from the hospital.

The incident took place at the Netaji Subhash Chandra Bose Medical College Hospital in the central city of Jabalpur. According to the hospital’s social media account, a Covid-19 patient had crawled out of the fourth-floor window and “tried to jump.”

Police were quickly called in, and people brought out a cloth with which to try and catch the man. However, after a conversation with doctors and officers, the jumper had a change of heart and decided not to risk his life, the hospital said.

The patient remained sitting outside of the window until a doctor in full protective gear climbed out and helped his colleague drag the man back into the building. The rescue was met with cheers and applause, as the heroic doctor waved his hand before returning inside.

Although the man’s motives were unclear, his stunt may be viewed by some as a suicide attempt. Various research shows that the Covid-19 pandemic has led to an increase in mental illnesses and suicides in India due to anxiety and depression. 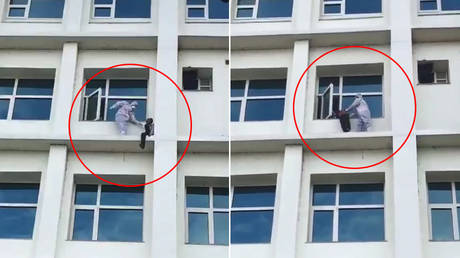