As if a global pandemic and one of the world’s strictest lockdowns wasn’t bad enough, South Africa has been powdered with snow and lashed by gale force winds – and now Cape Town’s streets are clogged with vast plumes of sea foam.

Amid storm surges and ocean swells, beleaguered Capetonians were confronted by the vast carpet of sea foam that was washed ashore on Monday morning, as seen in eyewitness video from the scene.

This is what sea point promenade looks like this morning. #capetownweather pic.twitter.com/S62qnv5jUZ

In recent days, the South African Weather Service (SAWS) has warned about the impending bad weather stemming from an emerging cold front, but no one could have prepared for the sheer volume of foam that swept ashore.

“The ocean is getting rough. Sea foam in Sea Point this morning. Large waves and storm surge possible today,” SAWS tweeted on Monday. It warned of high seas of between six and 13 meters, and gale force winds of up to 100km/h in certain coastal areas, with reports of vehicles being blown over.

To add insult to injury, 15 to 25cm of snowfall is also expected on the high ground of the Northern Cape and the mountains of the Western Cape, according to SAWS.

🛰🛰🛰The beautiful satellite image was taken yesterday. You can see over Lesotho, Western Cape, and Eastern where the snow has fallen. Some good amounts of snow were observed over the Eastern Cape.

The weather service also warned of medium and large sea-going vessels being at risk as a result of dragging anchors, such is the ferocity of the storm surge. 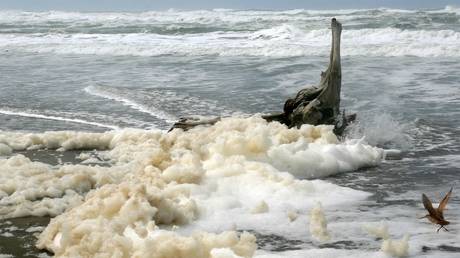 Bow and arrow attack kills and...