The first squadron of five multirole Dassault Rafale fighter planes has landed in India. The delivery of the aircraft, whose purchase had sparked embezzlement allegations, took place a month after a bloody skirmish with China.

The jets took off from Merignac in the southwest of France and traveled for around 7,000km, refueling mid-air. They landed at Ambala air base in India’s northwestern Haryana State on Wednesday morning local time.

The base will serve as the planes’ new home. The first batch of the Rafales is set to join the newly-re-established No.17 Squadron, nicknamed the ‘Golden Arrows.’

The very first aircraft that was handed over to the Indian Air Force had the tail number ‘RB 01,’ which the local media said was a homage to the sitting Chief of the Air Staff Air Chief Marshal Rakesh Kumar Singh Bhadauria.

The Touchdown of Rafale at Ambala. pic.twitter.com/e3OFQa1bZY

Overall, India expects the delivery of 31 more Rafale jets by 2022.

The planes arrived amid continuing tensions with China, prompting the Indian press to compare their combat capabilities with Beijing’s Chengdu J-20 fighters.

According to The Financial Express, the positioning of the jets at Ambala would allow their rapid deployment against a potential “threat” coming from China, as well as from Pakistan.

On June 15, 20 Indian soldiers were killed in a fierce melee with Chinese troops along the disputed border at the Himalayas. Beijing acknowledged “casualties” on both sides but stopped short of releasing its own numbers. The bloody combat was a culmination to a string of similar, but not lethal border confrontations between the states in recent months.

Despite the rising tensions, both countries agreed to defuse the situation through talks and mutual disengagement of forces in the disputed area.

The deal to buy the planes from France sparked a controversy in 2017. The opposition Indian National Congress party accused the government of unfairly awarding a lucrative contract to a foreign company and of wasting taxpayer money by supposedly overpaying for the jets. Both France and India denied the allegations. 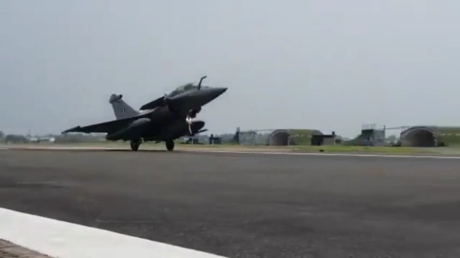 Journalists from Russia, Syria &am...

Arrests over clashes in Lyon a...