One lucky surfer got the fright of his life when a drone appeared telling him to return to shore. It was only when he made it to the beach that he realized how close he came to the jaws of death in the form of a 1.5m-long shark.

World championship tour surfer Matt Wilkinson, 32, was paddling on his surfboard offshore Ballina, Australia, soaking up the sun and churning some surf when all of a sudden a drone appeared overhead to interrupt the scene.

“I heard, like, the sound of its tail and I kinda looked back and I was like, ‘No, there’s nothing there,’ and I had some weird vibes and just convinced myself that it was all good, as you always do when you’re out in the surf,” Wilkinson said.

A recorded warning from an overhead drone advised Wilkinson to high tail it out of the water immediately. The serendipitous surfer was shown footage of his close encounter when he arrived on the beach.

#SHARK // World championship tour World Surf League surfer Matt Wilkinson has had a close encounter with a shark while surfing at Sharpes Beach at Ballina today.The welcome arrival of a UAV (Unmanned Aerial Vehicle) overhead alerted Matt via a warning over the speaker, at the same time a 1.5m shark surfaced just behind him.The amazing vision captured by the UAV, operated by Surf Life Saving NSW on behalf of the NSW Department of Primary Industries, stunned the operator with the speed at which the shark appeared on his screen during a routine surveillance flight.🗞️ https://bit.ly/34vOunj

Drone operator Beau Monks, from Surf Life Saving NSW, says he’s not entirely sure what made the shark change course but suspects it might have been a slight bump on the shark’s highly sensitive nose from Wilkinson’s leg or the noise of the drone which deterred it, though Wilkinson has another theory.

“It actually, like, went to have a bite and then my stinking little toe must’ve made it change its mind,” he said.

As a precaution, the beach was evacuated and closed for the day. Wilkinson was competing on the day Mick Fanning was attacked by a shark at an event in South Africa in 2015. 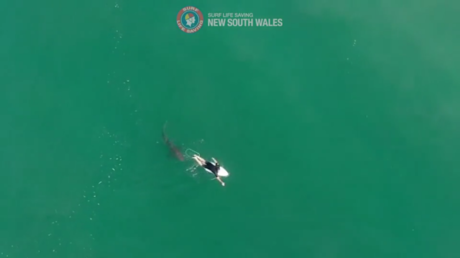 Finland had up to FIVE TIMES more...