Watch: British diplomat in China DIVES INTO RIVER to save drowning girl

Watch: British diplomat in China DIVES INTO RIVER to save drowning girl

Stephen Ellison, British Consul General in the Chinese Chongqing municipality, has been hailed as a hero after being filmed jumping into a river and saving a woman from drowning.

The official Twitter channel for the British Embassy in Beijing tweeted on Monday the UK foreign affairs community was “immensely proud” of Ellison’s Saturday act.

We are all immensely proud of our Chongqing Consul General, Stephen Ellison, who dived into a river on Saturday to rescue a drowning student and swim her to safety. pic.twitter.com/OOgXqsK5oe

The heart-racing footage from the ancient tourist town shows a young woman slipping on a rock, falling into a river and getting carried away by the stream before a panicked crowd, apparently too shaken to do anything.

The situation escalates quickly as it becomes clear that the woman can’t swim and is seen floating on her stomach while making limp motions with her arms.

Then Ellison, a 61-year-old veteran triathlete, is seen swiftly throwing off his sneakers before jumping into the river and quickly swimming up to her. The diplomat turns the woman around and carries her to a rubber ring some onlookers threw into the water.

Later, and not seen in the video, the woman quickly resumed breathing and regained consciousness, according to the UK’s diplomatic mission’s statement on social media.

Ellison was given some coffee to warm up and a dry set of clothes, for which he thanked the locals.

The diplomat-turned-lifeguard quickly became a sensation in Chinese social media with commenters lauding his bravery. 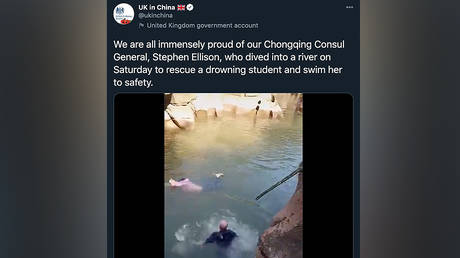