Some 400 people were detained following clashes between police and anti-government protesters in Indonesia on Tuesday, following the passing of a controversial new labor law.

Molotov cocktails, missiles, and water cannons were deployed by demonstrators and police respectively during the protests in response to the contentious law, which had been passed with the aim of stabilizing Southeast Asia’s largest economy.

There were protests in at least 12 locations across Indonesia, with 183 people arrested in Palembang in South Sumatra and a further 200 detained in Jakarta.

The violence was in response to the “omnibus” jobs creation law, which, labor unions argue, favors businesses over workers and impacts their wages, and also comes at the expense of the environment.

The legislation was endorsed by President Joko Widodo in an ostensible bid to reduce regulation and attract foreign investment to an economy that has been ravaged by the coronavirus pandemic.

Nonetheless, the manner in which the law was passed has caused major concern and “shocked everybody,” according to Susi Dwi Harijanti of Bandung’s Padjadjaran University, who stated that Parliament was normally slow to pass such kinds of legislation. 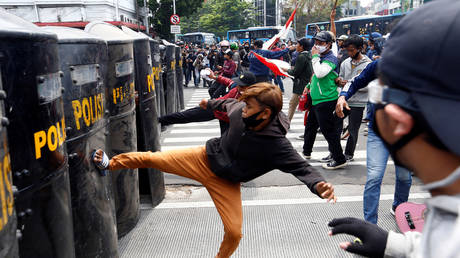