Was Glinka anti-Semitic? MSM ‘gets facts wrong’ as it fumes over Berlin’s plans to rename metro station after Russian composer

Was Glinka anti-Semitic? MSM ‘gets facts wrong’ as it fumes over Berlin’s plans to rename metro station after Russian composer

The woke idea of renaming a Berlin metro station after Russian composer Mikhail Glinka has enraged some German media which call him an anti-Semite. But those behind the accusations simply have the facts wrong, experts told RT.

BVG, which operates Berlin’s public transportation system, including the metro network, has recently suggested renaming its Mohrenstrasse (Moor Street) station to Glinkastrasse (Glinka Street). The move was apparently aimed at keeping pace with the anti-racist and anti-colonialist drive gripping the US and some European nations following the death of George Floyd at the hands of police.

But plans to give the station a more racially neutral name – that of prominent 19th-century Russian composer Mikhail Glinka, who already has a nearby street named after him – did not sit well with the German media.

The news outlets rushed to declare the man, who is considered a pioneer of Russian classical music, an anti-Semite – a very serious accusation in modern Germany, which is still quite sensitive regarding its Nazi past. The likes of the newspapers Bild, Die Welt, and Berliner Zeitung all spared no efforts in demonstrating how the name of the musician is not a good choice.

Among the allegations was one that the tragedy Prince Kholmsky, “written” by Glinka, is somehow about a Jewish conspiracy against the Russian state, thus proving his anti-Semitic views. Another episode from the composer’s life, in which he casually referred to a fellow composer as an “impatient Yid” (a pejorative term used to refer to Jews), did not escape the watchful eye of the German media.

For Glinka, ethnicity played no role

The accusations, however, do not appear to stand up to criticism. The tragedy Prince Kholmsky, which actually revolves around the fight between Russian forces and the Livonian Order in the 15th century, was written by playwright Nestor Kukolnik, while Glinka wrote some of the music for it and had nothing to do with the plot.

Russian musicologist Ekaterina Lobankova, who wrote a biography of the composer, told RT Deutsch that Glinka had many friends among Jewish artists and even fell in love with a Jewish woman during his stay in Berlin.

“He wrote that she was incredibly beautiful and compared her to Madonna. For him, the comparison to the Mother of God was the highest praise,” Lobankova said, adding that the woman, Maria, “had completely fascinated him and actually he wanted to marry her.”

“For him, ethnicity played no major role.”

Norbert Abels, a professor of musical theater dramaturgy at Folkwang University of the Arts and world literature lecturer at Mediacampus Frankfurt, sees the accusations against Glinka as part of a massive “cleansing” campaign gripping Germany and other nations, and which could very well leave the cultural history of humanity “empty.”

Abels, the former chief dramaturge of the Frankfurt Opera, also took aim at the media accusations.

“What they are not saying is that Glinka wrote a Hebrew song [for this tragedy] that is heavily influenced by Jewish folk music,” he told RT.

As for his supposedly anti-Semitic comment, Abels said it was taken out of context and was simply part of a personal argument with a composer of Jewish descent, who said that “the Russians are absolutely unable to compose music.”

Glinka is certainly not the only one whose name has suffered at the hands of the modern fighters against supposed historical evils. While protesting racism, some demonstrators have vented their anger at those who battled this very cruelty.

In the US, statues of several prominent abolitionists, including Frederick Douglass, a black 19th-century writer and orator, have fallen victim to the protesters’ rage. Some even called for the monument of President Abraham Lincoln to be removed, despite Lincoln actually leading the North and defeating the slaveholding southern states in the Civil War. 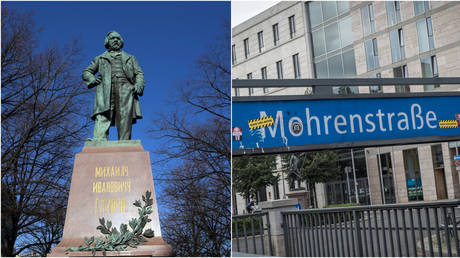