The zoo in Poland’s capital, Warsaw, is planning a first-of-its-kind experiment to treat grieving and stressed-out elephants with CBD oil, following the loss of their alpha female.

The three remaining African elephants at the zoo will receive small liquid doses of a dozen drops of CBD oil, two or three times a day, through their trunks or mixed into their food.

CBD is derived from a cannabis plant compound and does not contain THC, the psychoactive compound in cannabis, and therefore is as unlikely to induce euphoria in the already passive pachyderms as it is to cause any negative side effects.

The substance has been used widely to treat dogs and horses, but this ground-breaking pilot project will examine its effects on much larger animals and, more specifically, on their stress hormone levels.

Zoo staff have taken feces, saliva and blood samples to monitor the level of the stress hormone cortisol prior to dosing them, and will monitor this over the coming months and years.

“This is probably the first initiative of its kind for elephants,” Agnieszka Czujkowska, the veterinarian in charge of the project and head of the zoo’s animal rehabilitation department.

It can take months or even years for elephants to cope with loss and re-establish social hierarchy. The zoo’s herd recently lost its matriarch, Erna, and the gentle giants have been stressed out ever since, with elevated cortisol levels detected in the remaining three animals.

“It’s an attempt to find a new, natural alternative to the existing methods of combating stress, especially pharmaceutical drugs,” Czujkowska said. “Contrary to what some would imagine, the elephants won’t be using cannabis pipes nor will they be getting huge barrels of it!”

It’s estimated it will take two years before the experiment yields any conclusive results. If the pilot project proves successful, Warsaw Zoo may expand CBD oil use to rhinos and bears. 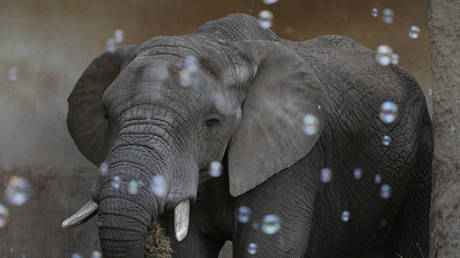