The last three US military transport planes have departed the Hamid Karzai Airport just ahead of the August 31 deadline, officially ending the American withdrawal from Afghanistan, the US Central Command (CENTCOM) has confirmed.

The last C-17 Globemaster transport lifted off from Kabul at 3:29pm East Coast time, General Kenneth McKenzie, head of the CENTCOM officially announced on Monday, calling it “the completion of our withdrawal from Afghanistan.”

With the last US military flight departed, McKenzie said every single US service member had now left Afghanistan. However, he acknowledged that the US did not manage to evacuate everyone it wanted to.

The war is over. America’s last troops have just left Kabul airport.

Had to climb on to the roof… but yes.

Hundreds of tracer rounds are streaming into the sky at the airport. Taliban evidently celebrating victory pic.twitter.com/qVfxMCZ6Ik

Reports had already circulated about the last US flights departing Kabul. The “final plane is wheels up. War is over,” Newsweek editor Naveed Jamali tweeted on Monday, citing an unnamed US official.

A few minutes earlier, a CNN reporter said the last three C-17 transport planes had taken off from Karzai International, saying it “could be the end of US presence” in Afghanistan.

Three C-17s have just left Hamid Karzai International Airport in a row. The time now is midnight in Kabul. This could be the end of the US presence in Afghanistan. pic.twitter.com/rS1NJKsxWy

Afghan journalist Masoom Ghaznavi posted what he called “the last pictures of the occupation of our country,” showing US troops preparing to leave the airport.

“All foreign occupation forces withdrew from the country moments ago,” Voice of America reported, quoting a Taliban official.

What was originally envisioned as the orderly departure of the last US troops and diplomats had turned into a desperate scramble on August 14, when the US-backed Afghan government melted away and the Taliban swiftly took over the country, including Kabul. Crowds of Afghans charged the airfield, some making it into the transports bringing in US troops, others clinging to wheels and wings as the planes left, only to plunge to their deaths.

More than 130,000 people were flown out by the US and its allies over the following two weeks, the vast majority of them Afghans seeking refuge in the West. 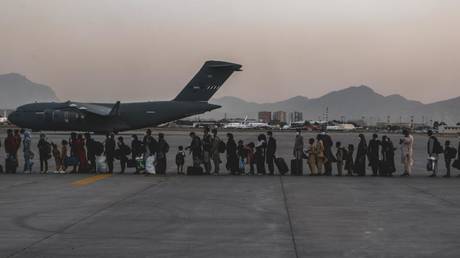 Schools could shut AGAIN this wint...