Close
Trending News
HomeWorldViolence must stop before someone dies: Irish FM laments scenes at riots in N. Ireland, says Dublin not to blame

Violence must stop before someone dies: Irish FM laments scenes at riots in N. Ireland, says Dublin not to blame

Violence must stop before someone dies: Irish FM laments scenes at riots in N. Ireland, says Dublin not to blame

Dublin has promised to play its part in bringing an end to the unrest sweeping across Northern Ireland, calling on the EU to use the flexibilities in the post-Brexit arrangement, before someone is killed in the violence.

“These are scenes we haven’t seen in Northern Ireland for a very long time… This needs to stop before somebody is killed or seriously injured,” Irish Foreign Minister Simon Coveney told broadcaster RTE on Thursday.

Coveney spoke of the need for the political leadership to come together, stop trading jibes and restore peace, adding that Dublin was willing to play its part in overcoming the violence.

Speaking with Newstalk Breakfast later on Thursday morning, Coveney said it was “completely unfair” to blame Dublin for the violence in Northern Ireland in recent weeks and claimed he had been advocating flexible alternatives to reduce the tension related to Belfast’s post-Brexit arrangement.

UK PM Boris Johnson and Taoiseach Micheál Martin have condemned Wednesday’s violence after a double-deck bus was completely destroyed after it was set alight by protesters. A journalist was also attacked in the unrest. According to the Police Federation of Northern Ireland, at least seven officers were injured in the violence last night and 55 officers injured in violence during recent days.

The anger relates to the ‘protocol’ governing Northern Ireland, which sees the British territory remain inside the EU’s single market but outside the trading bloc. Unionists claim the post-Brexit arrangement sees a de-facto border created down the Irish sea, separating Belfast from the rest of the UK. 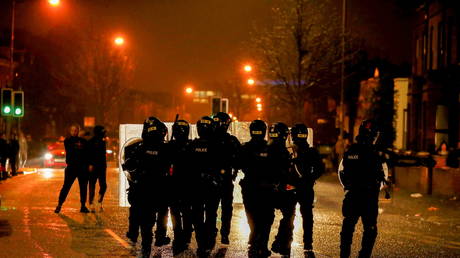