RT won in ‘Best in Education’, ‘Best in News and Media’, ‘Best in Youth & Family’, ‘Best Media Partnership’, ‘Best Use of Animations’, and ‘Best Use of Storytelling’ at the 5th Shorty Social Good Awards ceremony. In total, RT won the most awards at this year’s event, joining the ranks of other esteemed winners like Al Jazeera Digital, YouTube, Disney, National Geographic, HBO, and AMC.

Congrats to @RT_com for your SIX wins in Best in Education, Best in News and Media, Best in Youth & Family, Best Media Partnership, Best use of Animations, and Best use of Storytelling! #ShortyGoood pic.twitter.com/w3Hnp5axdx

#VictoryPages is a large multi-platform digital project dedicated to 75 years of Victory over Nazism. Three major elements of the project were honored during the Shorty Social Good ceremony.

‘The Endless Letter’ is a unique graphic series for Instagram, featuring hundreds of excerpts from original letters from the front line with illustrations by students of the RANEPA School of Design as well as renowned artists Peter Bankov and Mikhail Sorkin. Emotional quotes from frontline missives were combined into a kind of never-ending letter with an original score from composer Maxim Makarychev. An open-air exhibition with elements of VR showcasing designs from Instagram was held in Moscow’s parks during summer 2020.

‘Lessons of Auschwitz’ won in ‘Best in Education’ and ‘Best in Youth & Family’, took gold in ‘Best in News and Media’ and ‘Documentary Short’. The project pays tribute to the 75th anniversary of the liberation of the Auschwitz concentration camp by the Red Army. It features elements of virtual reality and volumetric video technologies, and was produced in collaboration with VR artist Denis Semionov.

‘War: Kids’ Drawings in VR animation’ won in the ‘Best Use of Animations’ category. A striking series of children’s drawings from the collection of the State Museum of the History of St. Petersburg, it was interpreted by famous artists in VR. These are all original children’s drawings that were created during the Siege of Leningrad (September 8, 1941 – January 27, 1944) and carefully preserved by caregivers and school-workers of the time.

Normally held in New York, this year’s Shorty Social Good went online and global, with results announced after midnight Moscow time. Previously, the in-house production team behind #VictoryPages was honored with a ‘Best in Education’ win in 2017 for #1917LIVE about the Russian Revolution. 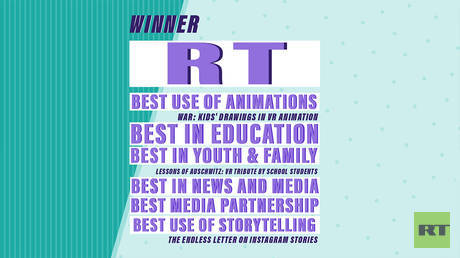 Pfizer & BioNTech to file for...